FAIR HILL, Md.--World #1 ranked rider Oliver Townend of Great Britain on Cooley Master Class stayed in the lead at the Maryland 5 Star at Fair Hill following a fault-free round during Saturday’s Cross Country to stay on 24.1. 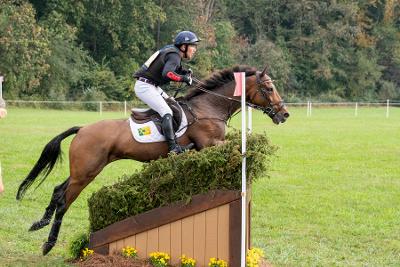 Oliver Townend on Cooley Master Class (Photo by Allen MacMillan)Tim Price of New Zealand is second on 24.3 with Boyd Martin third on 25, so only one rail separates the top three,

Only 11 horse-and-rider combinations finished clear within the 11-minute optimum time, including Townend, to stay on hisr dressage score of 21.1 and remain in first place moving into Sunday’s showjumping phase.

“The course rode well, all in all,” said Townend, 2021 Olympic Team Gold medalist. “The top-class horses coped with it extremely well. Some of the really good gallopers made it look like a walk in the park. The time was not difficult to get with these horses, but at the same time, there were still some nice challenges, some good technical questions. Obviously, there were fences that looked big and scary, which you want in a 5 Star, but my horse came out very well.”

"My horse is very careful," said Townend. "He needs a bit of encouragement. The distances all rode the way I'd walked them."

TWO TIME New Zealand Olympian Price was also double clear over the Cross Country on Xavier Faer to finish on his dressage score of 24.3 and stay in second. 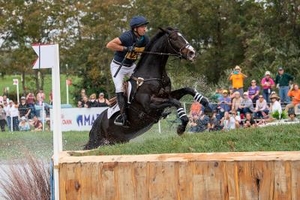 Tim Price on Xavier Faer (Photo by Allen MacMillan)Saturday’s completion also made him the first rider to complete all seven of the 5 Star events.

“It’s something to be proud of,” Price said. “It does pay to come from the Southern Hemisphere! I think what’s most important about every 5 Star event in the world is that they all have their own stamp of a 5 Star, and this feels like it’s got that. This will be exciting to come back to, and it’s just great to have another one on the calendar.”

Three-time U.S. Olympian Martin stayed in third place with On Cue, also going double clear to stay on his dressage score of 25.0. 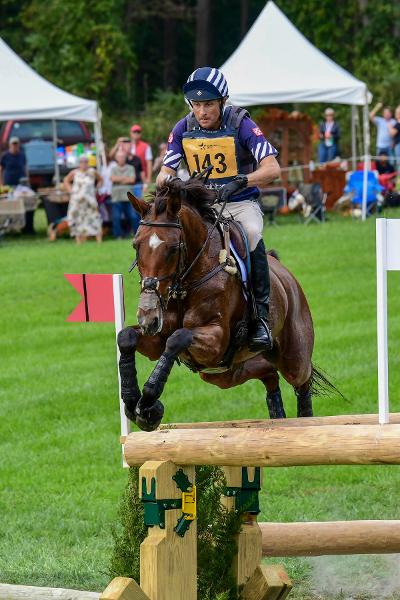 Boyd Martin on On Cue (Photo by Allen MacMillan)“On Cue gave me a wonderful round today,” Martin said. “I had the luxury of sitting back and watching Olie and Tim make it look easy. Basically, by the time I went, I knew the distances that suited each combination. I know that my horse is fit and a great galloper, so I knew that if I could get her through the jumps, she would make the time with plenty of gas left. It was a lovely ride. On Cue gave me everything she had today, and I feel fresh and ready to go for tomorrow.”

The Maryland 5 Star was Ian Stark’s debut as a 5 Star course designer.

He worried most about accidentally tricking the horses, but he was relieved to see each horse read the questions he presented.

“I feel as though I’ve aged 30 years in a week,” he said. “I never thought I was neurotic, but I feel like it now. Thankfully, the course just worked. There were good horses and good riders, and they made it look pretty straightforward. There were bits of trouble all over the place, but from my point of view, I’m very happy. I feel like I can breathe tonight.”

KURT MARTIN maintained his lead in the USEF CCI3*-L Eventing National Championship with a score of 23.5 on D.A. Lifetime, going double clear cross-country. 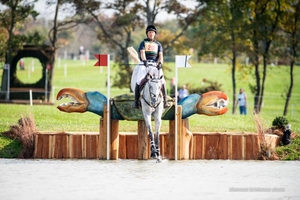 Kurt Martin on D.A. Lifetime (Photo by Shannon Brinkman)“Clarence is a lot of horse,” Martin said. “It’s more nerve-wracking to ride such a nice horse, and she gets very excited. The first few minutes at the start were really just managing her excitement and enthusiasm to get out there because she loves it so much. As we went around, she seemed to settle, and the jumps started to come up a bit better. I’m just so excited about the course, and she tried so hard today. I’m grateful that the owners have given me such an opportunity with such a great horse.”

Daniel Clasing, who was in fourth after Friday’s dressage phase, moved into second on a clean round on Olney Uncle Sam.

“I’m thrilled to be in second,” Clasing said. “I thought the horse was really good. It maybe wasn’t the cleanest round we’ve ever had, but he’s a phenomenal horse and can do things really easily.

“I thought there was a lot to do in the beginning coming down the hill,” Clasing said. “Then once you got to the Sawmill Field, you had just a couple of jumps and then a long pull. It was really testing the horses’ fitness and how fast you could gallop up the hill.”