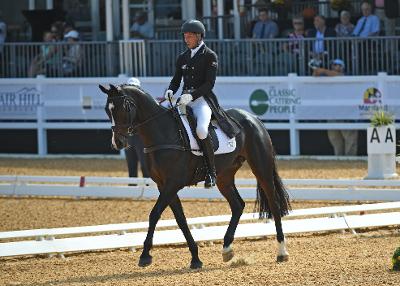 Tim Price on Xavier Faer (Photo by Allen MacMillan)Riding Cooley Master Class, Townend has a three-point lead over the other competitors going into Saturday’s cross-country phase.

Two-time New Zealand Olympian Tim Price scored 24.3 on Friday afternoon, jumping to second place on Xavier Faer, and three-time U.S. Olympian Boyd Martin on On Cue is third with a score of 25.0.

But the scores remain unusually close after dressage, with only 24 points separating first from last, with the majority only three to 10 or 12 points behind - very little to make up with time faults on cross country.

With the hilly terrain on the four mile cross country course, most, if not all, the riders will accrue time faults.

“A LOT OF preparation and practice and hard work goes into performing these dressage tests,” Martin said. “Even though it’s only seven minutes long, it’s hundreds of thousands of hours of practice to get there." 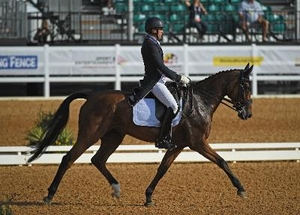 Boyd Martin on On Cue (Photo by Allen MacMillan)“I was thrilled On Cue today,” he said. “She’s just a fantastic horse; I love her. She’s flamboyant, she’s a mover, she’s really smart and tries hard. To go in the ring, you stay up late at night wondering and worrying that little things are going to go wrong, but I was really, really pleased with how she performed.”

“I don’t think I could get her any fitter, and that’s a comforting thought when you walk around this course,” he said. “It just seems like such a long way around; the jumps are technical. With the hills and everything else, it’s a real test to see which is the champion horse tomorrow. I really believe in On Cue. I’m riding a fighter. She’s going to have her ears pinned back, and we’re going to give it everything we’ve got.”

“It’s handy to have this event in my backyard," Martin said. “I live 20 minutes down the road. Usually at this time of year, we have to fly all the way to Pau, which is an expensive mission. To have a world-class event like this in this region is sensational. I’m lucky enough that I’ve ridden in all the 5 Stars around the world, and this place is breathtaking. It’s got everything – that stadium is brilliant, the cross-country looks fantastic, and the course design is awesome. I think it’s fantastic for the sport, and I’m just blown away by the standard that’s been produced here.”

The Top 3 riders of the USEF CCI3*-L Eventing National Championship remained the same after the final half of their dressage phase on Friday morning.

Kate Brown is second with a score of 24.8 on Carnaby,and Caroline Martin is third on 25.5 with HSH Vamonos.

Hannah Sue Burnett is tied for fourth after the CCI5*-L dressage phase, and she also moved into fifth place in the CCI3*-L on Carsonstown.

“The 3 Star course is equally as challenging as the 5 Star,” Burnett said. “In my opinion, it starts off a bit stronger. Luckily, my horse is not too green at this level, but fence #4 to the open Trakehner, fence #5 is still kind of eye-opening for the horses so early on. You have to really be on pace and make sure they’re on the job.”

“I feel slightly less pressure on my 3 Star horse because he’s younger and still being produced,” Burnett said. “I want to produce a great result with both horses, but the 5 Star is the top of the sport. There’s more pressure there. I’m really glad to have Carsonstown doing the 3 Star, so I can get on course and be daring and bold out there, to kind of feel it out a bit. Hopefully, I’ll get the last of my nerves out and be on task for the 5 Star later.”

“It’s incredible being here,” Talley said. “I grew up in Chester County, so Fair Hill was always one of the events we’d come to while I was growing up. Winning the 5-year-old division with Gina is so special because she’s a very talented horse, and we’re so glad to be here. For us to have this first year with the 5 Star is just fantastic, for the sport and for this area.”