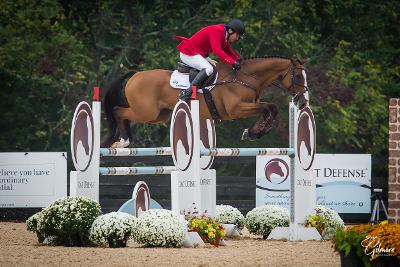 “Quasi Cool has come into his own and it’s exciting to have a horse that’s competitive in three phases,” said Dutton.

Dutton just edged out Buck Davidson who placed second in the division with a score of 34.8 on Cooley Candyman, an 8-year-old Irish Sport Horse owned by Cassandra Segal and Rolo 7 LLC.

“IT'S IN MY opinion the best cross-country venue here in the country, if not the world," said Davidson. "The arenas are fantastic.” 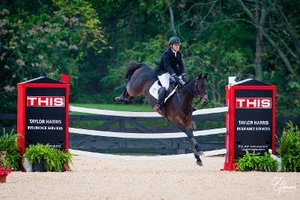 Buck Davidson on SorocaimaIn the CCI3*-S, cross-country proved to be quite influential, with Katie Lichten and her own Yarrow rising from fourth place to win the CCI3*-S division on her dressage score of 28.6.

Ariel Grald, riding Diara, also added no penalties to her dressage score of 27.6 to win the CCI3*-YH-S, and she also placed second on a score of 29.7 on Isla De Coco.

The national level horse trials also concluded competition at Morven Park on Sunday with just under 200 competitors on the Park’s famed cross-country course.

"The coming together of hundreds of volunteers, officials, and judges is what made this year's Horse Trials such a success! Many members of the equestrian community have already reached out to offer praise for the cross-country course, the grounds, and the Morven Park team," said Stacey Metcalfe, Morven Park's Executive Director and CEO. "It was rewarding beyond measure to see the many months of hard work we've put into preparing for the CCI4*-L come to fruition and to welcome talented riders of all skill levels to the Park."