LEESBURG, Va.--Phillip Dutton, second after dressage, moved into the lead following cross country, with stadium jumping to determine the winner on Sunday, Oct. 10, in the 4*-L on Quasi Cool at Morven Park, while Will Coleman on Chin Tonic HS won the 4*-S. 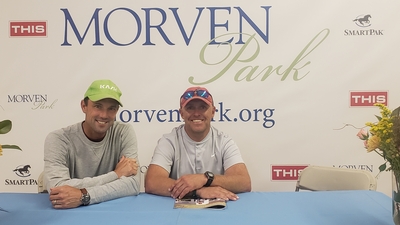 Will Coleman, left, and Buck Davidson (Photo from Morven Park)Dutton moved into first place in the 4*-L competition with a score of 33.8 on Quasi Cool.

“He’s definitely proven himself today,” said Caroline Moran, owner of Quasi Cool. “We’ve only had him two years and we’re just blown away by how fast he’s grown up.”

“Today was far and away his biggest test to date, and he stepped up and showed the potential we knew he had,” said Dutton.

Dutton said he was going to rest the horse and continue building his confidence for the future.

WITH DUTTON in first, Friday's leader Buck Davidson dropped to second after scoring 34.8 on Cooley Candyman.

The big shakeup was in third, where Caitlin Silliman who was tied for 20th place Friday after dressage, scored 37.8 and was able to move up thanks to her clear round on Ally KGO.

Silliman had the only double clear round of the day in the 4*-L division.

“Morven Park is a very good site for running cross-country at this level," said cross country course designer Derek di Grazia. "The terrain varies and allows for different cross-country questions to be asked. This was a galloping course with plenty for the riders to do and it gave the riders a true 4* test.”

Coleman stayed in the lead in the 4*-S division and won with a score of 35.3 on Chin Tonic HS.

“It was a great track and a great test for my horse,” Coleman said. “This was his second Advanced competition, and it went like a dream.”

The 3* competition concluded show jumping Saturday and will continue Sunday with cross-country at 9:00 a.m.

Matthew Brown and Lillian Heard, Friday's leaders after dressage with 26.4 and 27.4 respectively, were both double clear in show jumping and maintained their lead.

Brown is riding Super Socks BCF, and Heard is on Absolut Cooley Quality.

Arden Wildasin maintained her lead to win the CCI 2*-S divisions “A” and “B”.

On maintaining first place throughout the competition she said, “I am usually the one that comes from the back, so being in first and staying there felt great.”