AACHEN, Germany--Brian Moggre, at age 20, placed second by only three-tenths of a second to world number one Daniel Deusser of Germany in the 1 million Euro Grand Prix of Aachen on Sept. 19. 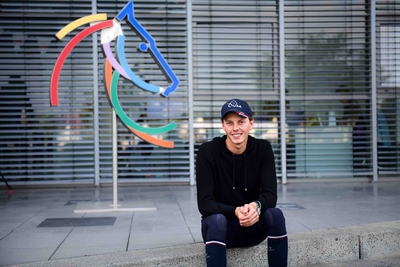 Brian Moggre in Aachen (Photo by Peggy Schroder)Riding Balou du Reventon, Moggre topped a field of 40 riders representing 15 nations in a Grand Prix that had two rounds to determine a field of seven in the jump-off.

"Brian was double clear in the Nations Cup and triple clear in the Grand Prix," said Chef d'Equipe Robert Ridland. "He's a professional rider at a very young age. He's incredibly talented and a very hard worker. What an asset for the U.S."

"At a very young age, Brian is working for perfection," said Ridland. "For instance, he's in the barn cleaning his tack."

"Daniel went first in the jump-off and went for broke, hoping the ones that followed with have a rail trying to beat his time," said Ridland. "Brian went last, and they were virtually neck and neck. They were so close we couldn't tell which one was faster. They both put on identical performances."

“I AM THRILLED," said Moggre. "I am going to be honest. I have dreamed about riding in Aachen since I was a little kid. I used to watch it on TV. Balou hasn’t just made it a positive experience for me, it has been an awesome experience.“ 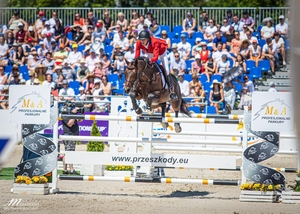 Brian Moggre on Balou du Reventon at a show in PolandThe pair haven’t been on the team for very long.

Up until 2020, the stallion competed successfully with the Irish rider, Darragh Kenny, and then his owner decided to give him Brian to ride.

“I put myself under a lot of pressure,” Brian said. “But his owner hasn’t put any pressure on me at all, she just wants the horse to be happy and I truly love him so much.”

"The World Championships being next summer is a huge goal of mine, so I’m starting to really focus on that," said Moggre. "Otherwise, just focusing on the young horses stepping up and developing them.

Askws what had been his proudest moment, Moggre said, "There have been a few, for different reasons. But I’d say one that’s very special to me was my first 3* Grand Prix win at Live Oak, which was on my junior jumper, who I’d had for several years, so it was a big win for both of us.

"So many different people have inspired me, it would be hard to just pick one. Currently, there’s Laura Kraut and Nick Skelton, who are both helping me – they’re a huge inspiration. My parents inspire me, and Lesley Leeman, who takes care of my horses – she inspires me every day, she works so hard, and she take such good care of the horses. All of those people have inspired me to be my best self.

"My love for the horses keeps me motivated. It’s been my passion since I was a little kid, and I’ve never really known any different. I didn’t really come from a horse family, so it all starts with me. I’d say horses motivate me the most.

"I have two horses here, who are both owned by Ann Thompson – Balou Du Reventon and Gelano. Gelano is a newer mount to me, who I got a few months ago, so I’m still getting to know him. Balou has been with me for under a year. They’re both fantastic horses, so I think I have a good shot for this week.

"There’s one young horse  who I own myself called Mtm Los Angeles. He’s not really a young horse, but he had a really big 7-year-old year, so we took it really slow. He’s 9 now so we’re getting him back on the scene again, and he seems really promising. There’s another one I ride called Nolo Contendere, who’s owned by Lindsay Maxwell. He’s a 6-year-old, and I think he’s got everything.

"I think atmosphere is everything at horse shows like this. I live for the crowd and the overall experience, so I think for the horses and myself, it really puts us in our game zone.

"The Rolex Grand Slam is great for the sport, and it’s something I’ve dreamed about since I was a little kid. To now be a part of it and showing at these shows, it’s really a dream come true. I think a lot of riders look up to it and it’s just great!

"There’s no horse show like Aachen in the world. I’ve been to Spruce Meadows a few times and it’s a great atmosphere and a great ring, but you come to Aachen and your jaw drops. The atmosphere and all the ring, the ground is just incredible. You feel as though you don’t have to worry about where you’re going to come and what you’re going to get. You can rely on it, it’s one of the best – it is the best!

DEUSSER was thrilled with his win 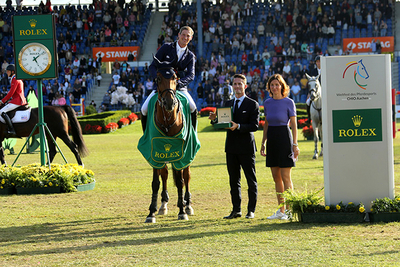 Daniel Deusser in the award ceremony (Photo by Michael Strauch)“It is a dream come true!” Daniel Deusser had just been presented with the trophy for his victory in the Rolex Grand Prix in Aachen and he couldn’t really believe it. He had been so close so many times before.

The two of them stood in the middle of the holy grass at the Aachen Soers, Killer Queen wrapped in the winner’s blanket in Rolex green, Daniel Deusser with a radiant smile on his face.

And the trophy on a pedestal was glimmering silver in the sun in front of him.

“Whether there are some carrots inside?”, Killer Queen seems to have asked herself carefully taking a sniff.

Whoops, the trophy fell to the floor.

Killer Queen spooked backwards and Daniel Deusser buried his head in his hands.

“The Rolex Grand Prix is always very special and as a German it was my big goal to win here in Aachen," said Deusser. "I have come close a couple of times, but finally I won it today. It is a very emotional moment for me to be honest. This is definitely one of the top wins in my career.”

It was a long, hard road, two rounds and a jump-off.

And an exquisite field of competitors comprising of some of the best riders in the world, including among others for example the Olympic gold medallists, Ben Maher and Explosion W, the team silver gold medallists from Tokyo, Laura Kraut and Baloutinue, not to forget Scott Brash, the only rider who has won the Rolex Grand Slam of Show Jumping to-date.

Deusser had to go first in the jump-off.

“That won’t be fast enough,” was the verdict from the stands, butt the skeptics had underestimated Killer Queen’s scopey gallop.

One rider after the other tried to crack Deusser’s time.

A pole at the first fence fell for Belgium’s Jérôme Guery and Quel Homme du Hus, the team bronze medal winner of Tokyo.

Next to go were their team colleagues from the Olympic Games, Gregory Wathelet and Nevados S, but he couldn’t top Deusser’s time, finishing in 42.83 seconds.

The Hanoverian gelding, Baloutinue, who had already demonstrated what a brilliant horse he is by jumping clear in the Mercedes-Benz Nations Cup, enabling the USA to claim the victory.

But the gelding brushed a rail and Kraut’s dream of eternalising her name on the Winner’s Board fell to the ground with the pole.

The crowd applauded ecstatically when Ben Maher entered the ring with Explosion W, but four faults in 40.67 seconds.

The next on the starter list was the “Master of Faster”, Scott Brash.

The Scottish rider sped to the first obstacle with Hello Jefferson ready to race, but after picking up four faults Brash curbed the pace slightly and crossed the finish line in a time 44,03 seconds.

What went through Deusser’s head in that moment?

“To be hones at that moment I was happy,” he answered later with a grin. Understandable.

But he still couldn’t breathe out yet, because there was still one rider to go: Brian Moggre, 20 years old, with his Balou du Reventon.

The round wasn’t quite so harmonious as Deusser’s, but the stallion gave everything for his rider and as the two of them catapulted over the Rolex Oxer, the last obstacle, the crowd cheered them on.

But it didn’t quite suffice.

Standing ovations for this young man, who promptly threw the reins away and hugged Balou du Reventon’s neck.

The crowd could hardly decide who they were happier for – for this young American who made his debut at the Soers this year or for Daniel Deusser, who had finally succeeded in winning the Rolex Grand Prix after several close calls.

"WHEN I got this job nine years ago. I thought that the most important thing I could do would be to include young riders with veterans, and I've done that all along," said Ridland, whose philosophy has brought along numerous young riders and hugely increased the depth of U.S. team.

"I'm excited about how it's all happened," said Ridland. "Four of our five riders here were in their 20s. It wasn't normal what we did here. You don't come to Aachen with a team of young riders against the strongest teams in the world."

But it worked in spades, with the U.S> winning the Nations Cup and Moggre placing second in the Grand Prix.

"The next generation has done what we had hoped it would," said Ridland.

Whether they did it on purpose, or even realized they were mirroring Ridland's philosophy, dressage Ched d'Equipe Debbie McDonald and Eventing Chef d'Equipe Eric Duvancer both brought youngsters with one or two veterans to Aachen, and it worked like a charm, with the teams finishing fourth and second respectively against top competition.