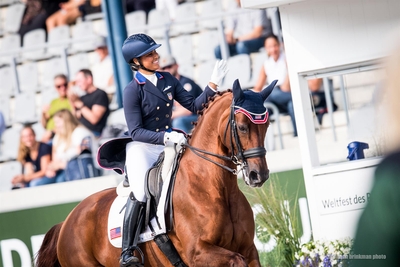 Anna Buffini on FRH Davinia la Douce (Photo by Shannon Brinkman)Germany placed first on 22 points, the Netherlands was second with 40 points, and Great Britain was third with 47 points.

This was an excellent showing for a team that included three newcomers to international competition, two of them very young, to finish over Spain (67), Sweden (67) and Canada (81).

The team was led by Chef d’Equipe Debbie McDonald.

Competition began on Friday, Sept. 17, with the FEI Grand Prix CDIO5*, which resulted in both brilliant and educational moments for the team to build on moving into the remainder of the competition.

JORST OF Reno, Nev., on Kastel’s Nintendo was the highest-placed U.S.rider on a score of 71.913 percent.

The two youngest athletes on the team Buffini of San Diego, Calif., on FRH Davinia la Douce and Ben Ebeling of Moorpark, Calif., with Illuster van de Kampert fought through some tense moments in their tests, but were ready to bounce back to deliver for the team in the Special and the Freestyle.

“I could not be happier," said McDonald. "This was all our riders’ first-time down centerline at one of, if not, the best show in the world and all had great results. After the first day, we were a little unsure of what to expect when we were standing in eighth as a team. For the last two days of competition with the Special and the Freestyle, they all really stepped it up.”

For Buffini, Ebeling, and Schrader-Williams, this was their first appearance for the team in international competition, and the learning experience will help them continue to progress within the pipeline and program for years to come.

McDonald spoke to the purpose of the team selection for this event and added that after such a strong year for the program in international competition and at the Olympic Games, the support and commitment to provide championship-like experiences will only continue to strengthen the depth of the program.

“Finishing in fourth with two riders just out of the U-25 and very new to the Grand Prix level, and two combinations with a bit more experience, but still learning the intensity of international team competition, it was fun to see how things came together. It was a good competition and great horses!”

Both Ebeling and Jorst competed in the FEI Grand Prix Freestyle CDIO5* class the following day, with Jorst scoring a personal best from the judging panel with a 79.105 percent.

This is the pair’s highest freestyle mark in their tenured career together and ultimately took seventh place individually.

Ebeling earned a 76.325 percent from the panel, which placed them just outside of the top 10 and into 11th place.