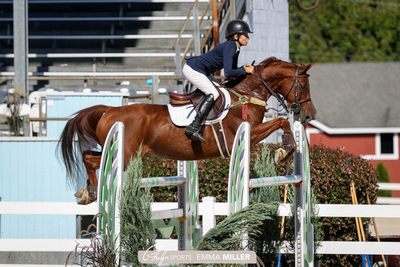 A total of 17 competed over Eric Hasbrouk’s 15-effort course made up of a double combination, a triple combination and multiple tricky rollbacks.

Katie Dawson on Favorite STE Hermelle was clean in the first round to make it into the jump-off along with five others including Saly Glassman on Vemac JJS Z, Morgan Baugher and Gladius Eickenrode and Emily Dougherty on SLF Peanut.

Dawson was also clean in the jump-off, and she was was quick, but promptly was beaten by Glassman, who raced around the ring shortly after in 33.262 seconds and pushed Dawson into third.

“HE IS ONE of Laura Chapot’s horses," said Dougherty. "I’d say our partnership is not just the two of us, but Laura is equally part of it. I started riding him two or three years ago and he is very different from my horse, but Laura has helped us so much figuring out how to ride him. Now I go in there, even if she’s not with me, and I know we can do it. Going to the last show, we practiced really tricky stuff in her indoor all the time, so when I saw the course I knew we’d be pulling from all the lessons we had and we know how to do it.”

“He’s incredibly quick, and it took me a while to not be scared of going on him because it feels kind of intense," she sai. "What we work on all the time is smoothness. He has a huge step but he can add [strides] quite easily and even if you end up with the add, if you stay smooth and consistent, he’s just really great.”

“I’ll just keep learning on him," said Dougherty. "The winning is really, really fun, but the journey has always been the most important part. This is incredible and I’ll always remember this, but I remember more the struggle and figuring out how to ride him. I look back to my initial lessons on him and the fact that we’ve both learned so much since then, I never thought I could jump him. He’s always been very capable. That’s the coolest part, we’ll just keep learning from Laura.”

FROIO WENT first in the $5,000 Low Junior Jumper Championship with Swanview Sarco Deluxe and was first to go clean.

The second and final rider to go clean was Kacy Smith on Chopper 5.

Froio went first in the jump-off, putting in a speedy and clear round to finish in just 37.894 seconds.

Smith had two rails down to settle for second which made Froio the $5,000 Low Junior Jumper Champion.

Olivia Brown aboard Alania rounded out the top three with an 8-fault finish in the first round completed in 69.387 seconds.

“I really love him," said Froio of Swanview Sarco Deluxe. "He’s always been really good to me. When out in the ring he gives me a really good feeling, and I know that we’ll accomplish a lot together. He belongs to my trainer, Kali Jerman, who got him just a couple months ago.”

“I was a little nervous before going into my ride," she said. "I tried to use my nerves to help me get through it. During my round I kept on thinking ‘You got this’ and it turned out to work in my favor.”

“The last time I was here was a couple of years ago with my pony," said Froio. "I’ve just really always loved this show and all it has to offer. I have Princeton coming up and a couple more fall shows and I’ll probably head down to Florida later in the year.”

The $1,500 Low Adult Amateur Jumper Championship began the day in the Dixon Oval, with Jennifer Platt on Diago winning the large class with a clean round in 31.581 seconds.

The competitive $1,500 Low Children’s Jumper Championship was a fierce battle until the end, but ultimately it was Ella Quigley on Sl Sanhaço who won the 2021 title, riding well to complete her final round in just 32.917 seconds.

The $3,000 High Adult Amateur Jumper Championship was next in the order, with Stefani Green on Wender R, a Dutch Warmblood gelding winning with a clear round of 31.69 seconds.

Second in the class was Leslie Schillat on Kiane, with a clear round in 32.666 seconds.

In the $3,000 High Children’s Jumper Championship that followed, Juliet Matinhoo n Miss Lucy HH had a clear jump-off round in 31.475 seconds to win.