UNIONVILLE, Pa.--Phillip Dutton on Quasi Cool won the CCI4*S title at the Plantation Field International Three-Day Event, but the big news is that eventing at Plantation Field will continue for years to come. 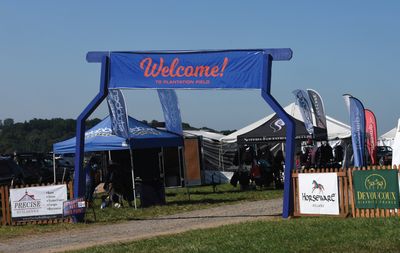 Plantation means a place where trees are grown, and Plantation Field eventing offers thousands of riders of every skill from youth and beginners to Olympic veterans a place to compete, for riders to learn and for veterans to bring horses along.

It is a beautiful facility that is exceptionally well run, and to have lost it because, as was rumored and widely reported at the time, one person hoped to raise a publication's advertising.

“We resolved all the issues with the governing bodies, and we expect that this event, Plantation Field, will continue here for many years to come," said Cuyler Walker, who owns the land.

“It’s a very unique venue and it would be terrible for our sport to lose it," said Dutton of West Grove, who was involved in beginning the Internstional competition. "It’s such a good viewing venue and has its own unique atmosphere and style, and it’s great for our local community. My wife Evie and I joined forces with Denis when we wanted to step it up from doing just the national classes; we’ve stepped back bit, but it’s rewarding to see where it is today.”

A LARGE crowd watched cross country on Sunday, Sept. 19, in which time played a major factor as only Fylicia Barr on Galloway Sunrise finished the cross country course within the time allowed to move up two places into third. 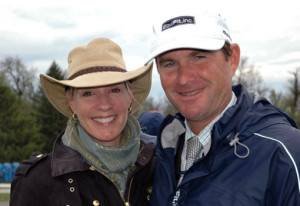 Phillip and Evie DutonDutton added only 3.2 time faults to his dressage score of 25.7 on Quasi Cool to win the CCI4*S divison at the Plantation Field International Three-Day Event.

"This horse came from Germany where he had been eventing at the two star level," said Dutton of the Holsteiner gelding owned by Caroine Moran. "We got him about two years ago, and he's been progressing nicely. This is his first four star."

"Coming into this event, I wasn't planning to go so quick on cross country," said Dutton. "But when I saw where we stood after dressage and jumping, I thought I'd just go as fast as I could without scaring him, and he handled it well. That's the fastest I've gone on him, and it was a little bit of a shock to his system"

"He's qualified now for a long four star, so he may do Morven Park," said Dutton. "He's pretty laid back. He had to adjust to the heat and bugs in this country. It affected his skin."

“It wasn’t completely different, but I liked the changes," said Dutton. "It’s very hilly terrain here, and it can be hard on the horses if you have too much downhill, and I think Derek did a good job of making us go across the hills , instead of up and down the hills. I thought that was very fair for the horses.”

Dutton was third after dressage and jumped clean in Saturday’s show jumping to be second going into cross country.

Buck Davidson on Erroll Gobey, third going into cross country, also was clear jumping and was only two seconds over the time, moving up from fifth after dressage to second place overall.

"I've had this horse a litle while now, we bought him as a 6-year-old," said Davidson. "He'd done some preliminary in England when we got him. He has all the jump in the world, but he sometimes feels like a Mac truck running downhill without brakes."

"He had a wind operation last year, and he's much better now," said Davidson. "I wanted to go fast today, but I apparently didn't go fast enough. He goes to Fair Hill five star next."

“Knowing the position I was in after the show jumping I definitely intended to go out quickly on the cross country,” said Barr, who recently started training with Lillian Heard for jumping. “The cross country is where my mare shines. She’s pretty quick-thinking and efficient in the turns, she’s got a big step, and we’ve known each other so long that I trust her. Plantation Field is righ tin our back yard. We’ve competed here five years in a row and I know the course, I know the terrain, and I thought today was the day to go for it.”

"I've had her since she was 2, so it's nice to know I can trust her," said Barr. "She''s going to the five star in Maryland next.

Dutton also had two horses in the CCI2*S and finished second on Clueso and tenth on Hatchi in the A division.

CAROLINE MARTIN won the CCI2*-A on the Irish Sport Horse HSH Galway Bay, leading from the start with a 22.7 and finishing on her dressage score.

“I got him as a 5-year-old, did a couple Young Horse classes and funny enough fell off at our first Beginner Novice,” she said.

Martin runs an active sales barn and said HSH Galway Bay originally came over with a group of sales horses.

“Someone vetted him and passed on a silly x-ray; again this April someone almost bought him but then passed on him,” she said. “Everyone’s for sale for the right price, but he’s not really for sale anymore!”

Courtney Cooper finished third in the CCI3*S Division A with Excel Star Time to Shine.

Decker is based at Boyd and Silva Martin’s Windurra USA and trains with Lillian Heard.

She scored a personal best in the dressage, a 24.9, and was in second place after dressage, then took the lead when dressage leader Alyssa Phillips and Cornelius Bo had several rails down in the show jumping.

With a clear cross country round, Decker finished on her dressage score.

“On cross country yesterday he was really rideable and just zoomed around, it felt like a piece of cake,” she said.

Cooley Monsoon was previously ridden by Piggy March in Great Britain, and imported by an American rider who found him too much to handle.

“He’s a big horse and he’s a lot to handle, especially for someone who doesn’t necessarily want to go fast!” Decker said. “I was able to purchase him when I was in Aiken in March and this is our second two-star together. We hope to do a two-star long in the fall. He’s a really good boy, he takes care of me.”