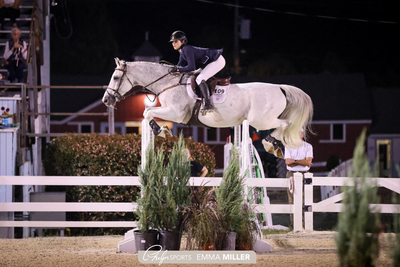 Thirty competitors went in the first round with nine going clean to make it to the jump-off.

Kaitlyn Williams of Port St. Lucie, Fla., on Cassio Melloni was the first in the jump-off in the Grand Prix, and she jumped a second clear round and finished in 36.826 seconds, a time that would hold up through the next eight contenders,

Grace Long went shortly after Williams, and she knew she would have to be quick with Happiness VD Hazel HOF.

While she did not have the chance to watch the others go, she did her best to stay inside the turns, taking numerous risks.

Her last rollback shaved precious seconds off their time as they galloped down the last line to fly through the timers in 38.620 seconds, which would ultimately secure a second place finish.

Second to last to ride, Michael Burnett on Chagrand was clean but not quite fast enough to catch Williams, finishing in 38.979 seconds for third.

“I GOT this horse last October, so it’s been almost a year," said Williams. "He is just incredible. There’s really not much else to say because he’s just too good to me. He’s quite simple to ride but the funny thing is that he’s quite lazy. He’d rather just stay home and eat, but he’s unbelievable.” 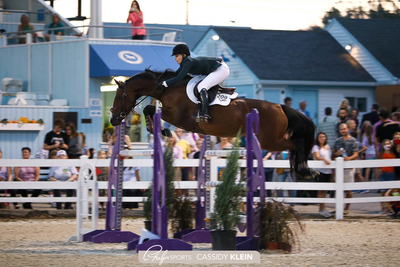 Lucy Matz on Jillz (Photo by Cassidy Klein)“We did the Welcome Stake on Thursday, so he has already been in the ring, but today it was a little bit different," said Williams. "The first line we were planning to do eight strides. bu het jumped up quite high and a little bit slower on the first jump so I did nine instead. I thought the next line came up nice, and then for the diagonal line, he jumped the triple great. I got a little carried away trying to slow down to the red and he really saved me. He jumped the rest great. In the jump off, all I really have to do is kick and he does the rest. I jumped one great and he saved me at jump four a little bit and I almost went by it. The combination came out quite perfect and then I just kept kicking to the green and he saved me again at the liverpool. I came up a little short in the turn and just ran to the last. He’s just an unbelievable horse.”

“He’s really experienced and has shown a ton over in Europe, and then he came over here," she. "When I got him he was out of work because Covid had hit and everything kind of stopped, and he just got put on the back burner. I got really lucky being able to purchase him and put him back into work. This is my first time showing in a class with this kind of environment besides on Thursday, but it was nowhere near this exciting.”

“He’s going to have a little bit of a break," said Williams. "He’s not going to be shown until Harrisburg. During the winter we go to Ocala, and I plan on bringing him to show a couple of times. I try not to overdo it with him. He’s experienced so he doesn’t really need to practice jumping or anything.”

IN THE $7,500 Show Jumping Hall of Fame High Junior/Amateur Jumper class, Matz on Jillz was first to go clean in the class with a time of 70.186 seconds.

Kristin Glover on Eyecatcher was the last of four to go in the class.

Glover flew through the course, managing to keep pace with Matz’s time but ultimately knocked a rail, putting her second and leaving Matz to take home the win and earnthe  championship in the $7,500 Show Jumping Hall of Fame High Junior/Amateur Jumper.

“I just started riding Jillz in June." said Matz. "My brother actually started riding her when she was 6 years old. He did a really great job training her and bringing her up. It’s a pretty fresh partnership, but she’s such a great horse and always game. This is her second time under the lights and I’m really proud of her.”

“We just planned to have a good forward ride." said Matz. "She’s a really game horse so I just wanted to give her a forward and confident ride and execute the plan like we walked.”

“Devon is one of my favorite shows, spring or fall," she said. "After almost two years it’s really great to be back in the Dixon Oval, and the atmosphere is like no other.”

“She’s 7, so there’s a young jumper championship in Princeton that we’re going go to," said Matz. "We’re just going to keep developing her and see where she goes.”