Aachen, Germany--It was a historic week for U.S. Eventing as the team of Will Coleman on Off The Record, Sydney Elliott and QC Diamantaire, Ariel Grald on Leamore Master Pla, and Tamie Smith with Mai Baum placed second  in the FEI Eventing Nations Cup at Aachen, the highest ever result by a U.S. team at the prestigious event. 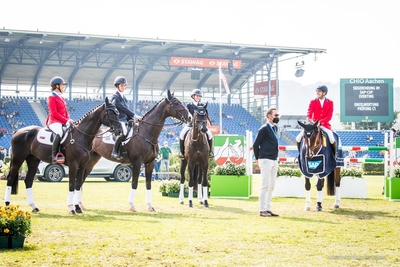 The US Eventing team at CHIO Aachen at the prize-giving in the stadium
(L-R) Tamie Smith and Mai Baum, Ariel Grald and Leamore Master Plan, Sydney Elliott and QC Diamantaire, Chef d'Equipe Erik Duvander, and Will Coleman and Off The Record. (Photo by Shannon Brinkman)And to make this achievement even more impressive, Coleman of Gordonsbille, Va., on Off The Record, a 2009 Irish Sport Horse gelding, placed first individually, becoming the first American combination to top the eventing podium at Aachen.

Thes historic victories raise hopes to the U.S. in international competitions such as next year's World Championships.

These up-and-coming riders may finally give the U.S. a medal finish after a number of poor finishes in recent years.

Hopefully, their success will inspire young eventers to develop horses that move well enough to finish high in dressage yet have the speed to compete in cross country.

Coleman is an established and winning evener, and his teammates are on their first major international team.

Coleman and “Timmy” had a stellar Aachen experience across all three phases, beginning with a 29.7 in the dressage.

Coleman had a smooth jumping round in the stadium, posting one of only three double-clear rounds and moving up the leaderboard from 11th to third place heading into the final phase.

He closed out the week with the best cross-country ride of the day, adding only 0.8 time penalties, giving Coleman on Off The Record a personal best score of 30.50 and putting them 2.2 penalty points ahead of second-place finisher Laura Collet and Dacapo of Great Britain.

“THE WIN is a testament to all the people who are part of my team,” said Coleman. “That includes my family, my owners, my wife, my vet, my farriers, and all the people who helped me in training. This is a reward for all of them and it’s just very satisfying and humbling at the same time.” 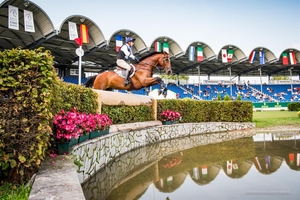 Will Coleman on Off The Record (Photo by Shannon Brinkman)As alternates for the U.S. Eventing Team for the Tokyo Olympics, Coleman and Timmy had the opportunity to train in Aachen earlier this summer during the team’s pre-export quarantine.

“When I came here for PEQ, I decided to try to make that experience as formative as I could for this horse, and I think it was,” said Coleman. “I do think it helped him, the fact that he was here for 10 days without being under any major stress. I think it played a part in his ability to come here and perform.”

Reflecting on his win, Coleman kept the result in perspective, but had high praise for his teammates and the team experience at Aachen.

“Hopefully this win means something to supporters of American eventing,” he said. “It’s just one event, and if we’re trying to build something that’s sustainable and lasting and repeatable, maybe this is a step in the right direction. I think everybody that was here this weekend representing the United States did a fantastic job. I’m very proud to be associated with this group of riders. I was really proud of all of them today, how they rode and the way they supported one another. It was a really fun trip to be a part of. I think if there’s one thing to take away from it it’s the power of that and the value of a team being really there for one another.”

Californian Tamie Smith and Mai Baum, a 2006 German Sport Horse gelding, are known for their dominance in the dressage arena, and they did not disappoint this week, posting a 25.2 to stand in second place after the first phase.

An expensive two rails in the jumping knocked them down the standings, but with no jumping penalties and just 7.2 time penalties in cross-country, the pair finished in 10th place on a score of 40.40.

Ariel Grald of Vass, N.C., on Leamore Master plan, fresh off a third-place finish in the CCI5*-L at Luhmühlen earlier this summer, had one of the best jumping rounds of the event with only 0.4 time penalties added to their score.

A clean cross-country jumping effort with 10.4 time penalties secured a 16th place finish overall with a total score of 45.6.

In her first overseas outing, Sydney Elliott of Benton, La., rode QC Diamantaire through a solid effort with just one rail in the stadium and no cross-country jumping penalties to complete their European debut on a 55.40.

Lauren Nicholson on Vermiculus competed as an individual combination for the U.S. at Aachen, completing in 24th place on a score of 52.4.

With four good scores, the U.S. team finished on a team total of 116.5, just 0.3 penalties behind the first-place finishers from Great Britain.

“I’m very pleased with the results, as we brought a team to test them in a championship environment and see how they would rise to the occasion,” said Chef d’Equipe Erik Duvander. “I’m very proud of Will Coleman for winning a class that is extremely difficult to win. It’s encouraging to see that the U.S. is competitive on the world stage and that the riders’ hard work is paying off.”