DEVON, Pa--The Chapot sisters are making the Devon Fall Classic their own playground as Wendy Chapot Nunn followed up sister Laura's trio of wins with a victory in the High Junior/Amateur Speed class on Saturday, Sept. 18. 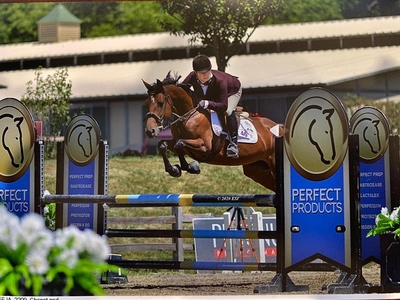 Wendy Chapot on Cache at a previous competitionRiding Cache, owned by her sister Laura, Wendy was the last to go in the class, and she flew around the course to finish in 54.561, taking a full six seconds off second placed Le Lee McNeil on Heike ES.

I've been riding Cache for about three years, said Chapot.

But between work and three children, Chapot doesn't get much time to ride.

"I ride about once a week when we're not competing," she said. "And during the winter when it's so cold it's more like once a month. At least until Laura comes back from Florida and gets after me."

"Cache can be very quiet, but once she gets excited, she gets chomping at the bit and dancing up and down. She's ready to play."

"I want to qualify for Devon next spring," said Chapot. "We just won the Zone 2 championship at HITS, so I should have enough points to qualify. But with full time work and three kids, my aspirations at this point don't go far beyond Devon."