UNIONVILLE, Pa.--Boyd Martin of Cochranville, Pa., was the second to last rider in the CCI4* division at Plantation Field International on Sept. 17 with Long Island T to take the lead. 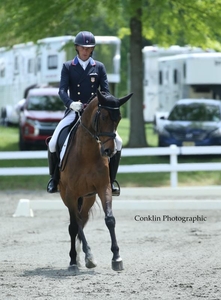 Boyd Martin on Long Island at a prior competition (Photo by T Conklin)The pair recently contested the AEC again, taking the early lead but then dropping out of the running after they parted company at the water complex on cross country.

“Long Island T has been a bit hit and miss through his whole career,” said Martin. “I fell off at the AECs but he was going like a dream until our unplanned dismount. I just need to keep myself on top the whole way around!”

In preparation for this weekend, Martin said, “I’ve been quietly schooling training jumps at home to get him calm and confident. He thrives on confidence; while I might test the other horses in their training, I make it quite easy for Ludwig. Obviously this Sunday, cross country day, will be judgement day for us. If things go well we’ll take him to Maryland for the five-star, or to Morven Park. I love Ludwig but he’s getting a little older and further on in his career. I’d like to finish the year with a good success for him, and we’ll decide where to go next depending on how he goes on Sunday."

Reflecting on today’s dressage test, Martin said, “He’s such a performer and lights up a little bit in the ring. When he gets excited he gets more extravagant – the only distraction for me today was my wife Silva screaming at our kids in the background, but fortunately Ludwig stayed focused and put in a sterling performance, he’s mega fun to ride on the flat. Obviously [dressage rider] Silva has helped me a lot; he gets a little hot in the changes and Silva usually rides him once a week.”

THE MARTINS' farm, Windurra USA, is located in Cochranville, near the event and Martin said, “It’s a luxury being able to prepare ten minutes down the road. Ludwig finds this 4* test really easy and just flows through like clockwork now. There are certain advantages to riding older horses: he kind of knows the test by now, so I just sit there and keep him in a good balance.”

Martin’s other entry in the CCI4*S is On Cue, owned by Christine Turner, who was Martin’s traveling alternate for the Tokyo Olympic Games.

She finished the summer by winning the Advanced Championship at the 2021 American Eventing Championships.

After dressage today she is placed seventh on a score of 29.3.

“Cue is getting ready for the Maryland Five-star,” said Martin. “I’m still on the fence whether I’ll run her cross country here on Sunday because she’s been performing well and I don’t want to run her too much. I’m looking forward to a good show jumping round and we’ll see how the footing is. This would be a great fitness run and a good prep event for the five-star.”

Alexandra Knowles and Ms. Poppins are ranked second (24.6) and Phillip Dutton and Quasi Cool are third (25.7) after dressage.

There are 48 horses competing in the CCI4*S.

In the CCI3*S Meg Pellegrini on RF Eloquence leads the division on 23.3.

Dan Kreitl and Carmango are second (23.8) and Woods Baughman and C’est La Vie round out the top three on 25.1.

Originally from Oklahoma, Pellegrini, 17, said that her family lived in Newport Beach, Calif., for a couple of years but moved east to Wayne, Pa.,so that she could pursue her interest in eventing.

She has competed at the Advanced level for a couple of years now, and represented Area VI at the North American Young Rider Championships.

She is currently based with trainer Lillian Heard at Windurra USA.

Her horse, affectionately known as Ricky Bobby, was purchased in 2018 from Ellie O’Neal, who had competed him to the five-star level and wanted him to go to a Young Rider as a step down in his career.

“He was amazing today,” said Pellegrini. “We’ve been chipping away at home and it feels good when the pieces fall together. He’s on the hotter side so any test where he stays calm is a win for both of us. A lot of it comes from me, because he knows what to do. I have to keep myself relaxed, work every movement, and hope it will come together. Thankfully it did yesterday. We put a lot of work into prepping at home. When you get to warmup you can’t really change much, and he went in and killed it.”

The CCI3*-S will do both cross country and show jumping tomorrow.

“Cross country looks great,” said Pellegrini. “It is going to be a challenge for the 3* horses. The footing looks great and I’m excited, I think it’s going to be really fun.”

Though he has done a couple of three stars this year, she said that they have not all been successful.

“It feels good to be getting back on track,” she said. “At Fair Hill we came out of the box too fast and I ended up pulling up pretty early on. We went to Jersey and it was a really tough course; he was amazing around the first half but near the end of the course we parted ways. I’m getting my confidence back and making sure he trusts me. We feel much more prepared now than six months ago and I’m pretty happy with the weekend so far!”