DEVON, Pa.--That Laura Chapot won the Welcome State at the Devon Fall Classic was reported last evening, but it was too late for the entire story, so this covers the Welcome Stake as well as classes preceding it. 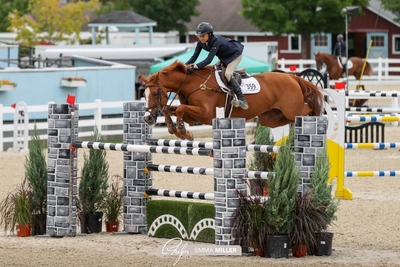 Course designer Eric Hasbrouck of Bedford, N. Y., built an 11-obstacle course that challenged the field of competitors to show their speed and adjustability while featuring two double combinations in addition to a long bending line to a stone vertical-oxer that ended jump-off hopes for several pairs.

Ten qualified for the immediate jump-off with Cassandra Kahle on Giana setting the time to beat at 33.309 seconds in the second round.

Chapot soon beat Kahle’s time, stopping the clock in 30.962 seconds, which sent her to the lead.

Grace Long on Happiness VD Hazel Hoff gave her jump-off round everything she had, finishing in 31.333 seconds, just a fraction of a second slower than Chapot’s time to finish in second place.

Matthias Hollberg on Get Gaudi finished in 31.729 seconds to fall just behind the Chapot’s and Long’s, and settle for third, while Kahle would round out the top four.

PRIOR TO to the Welcome Stake, in the $750. 7-Year-Old 1.35m Young Jumpers, the first of four to qualify for the jump off was Devin Ryan on Ascalitta SBK Z, who led until Gracie Allen on Jelster Van Stal Romano finished clean in 36.895 seconds to take over the lead. Putting in their best effort,

Lucy Matz on Jillz was clean and quick enough round to give her second, and third was Seth Vallhonrat on Electrico, in a time of 42.212 seconds.