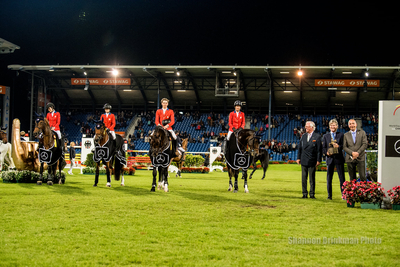 U.S. winning team at Aachen (Photo by Shannon Brinkman)“Winning in Aachen is the pinnacle. It’s as simple as that,” said Chef d'Equipe Robert Ridland after the team’s historic performance. “These were four of our final six riders for Tokyo, so this was pretty simple, we just went straight down the list. We had our Olympic quarantine here, so it gave a good idea as to what to expect a few weeks later.”

An outstanding US team, a fall for the German team and a hot pursuit by the French team turned Thursday evening at the CHIO Aachen into a nail-biting affair.

Finishing on just four faults, Robert Ridland’s US team won the Mercedes-Benz Nations’ Cup in front of approximately 18,000 spectators, precisely the amount that were allowed into the Stadium in line with the Corona regulations.

Kraut remembers the last time a U.S. team rode to victory in Aachen 16 years ago in 2005, as she was also a member of that squad.

And her clear round in the second phase was the one that brought the team the victory in this year's event.

SPRINGSTEEN, who together with Laura Kraut was a team silver medallist at the Olympic Games in Tokyo, on her Olympic mount Don Juan van de Donkhoeve was the first rider to go, in the Aachen Nations Cup, and she was clean.

"We had drawn first in the order, so she was actually the first in the ring, and she set a pretty good pattern for us," said Ridland.

Deslauriers, 22, on Hester and the just 20-year-old Brian Moggre with Balou du Reventon were also clean, which meant the four faults Kraut picked up on Baloutinue was the drop score.

That put the U.S. in the lead after round one with 0 faults, followed by Sweden, Belgium and Germany, all with 4 faults, France and Italy with 8, Netherlands with 12 and Brazil with 17.

Four of our five riders here in Aachen are in their 20s," said Ridland. "No other team was remotely near that young."

"Many of our wins have come from behind, with us not on top after the first round, and here the reverse was true, which made me pretty nervous," said Ridland.

In the second round, the Course Designer, Frank Rothenberger, put some of the jumps up and made some of the others wider, and that was a turning point for some teams.

As the first to go for the USA, Springsteen picked up eight faults, which raised the hopes of the other teams, and then Deslauriers had four faults.

"Just as I had predicted, in the second round things didn't go so well for us," said Ridland. "After two riders, instead of leading we were one rail behind."

"Then Brian rode lights out and jumped double clear, and we were back in it," said Ridland.

“Aachen is something I have dreamed of since I was a little kid, so to be here with a great horse and great teammates could just not be any better,” said Moggre. “I never have had a horse before that has gone and jumped great things. I only had young horses and my junior jumpers moving up, so it was a lot of pressure to put on myself to step up to the plate, but he’s so reliable and so kind, I couldn’t ask for anything more. I just love him so much.”

Up until then the USA’s total score was four faults and since they were in the lead after the first round, the U.S. team was the last to go in round two.

That meant for Laura Kraut, if she was clean, the U.S. would win, if she had one rail down there would be a jump-off, two or more rails and Sweden would claim the victory.

“When Brian told me that, if I didn’t ride clear there would be a jump-off against Sweden, I couldn’t stomach that, so I made sure I didn’t have a rail," said Kraut, because precisely that situation had arisen at the Olympic Games, which ended with gold for Sweden and silver for the USA.

"When Laura went in, she was bound and determined not to let the kids down," said Ridland.

Baloutinue had been pretty strong in round one.

“I don’t think he has ever been in such a situation with so many spectators before." said Kraut. ”He was much easier to ride in the second round."

And after she had jumped the last fence clear, her team colleagues hugged each other and cried for joy on the Rider’s Stand.

Chef d’Equipe Robert Ridland: “Winning here is a pinnacle! We came very close a couple of times before. Even while we were still in Tokyo we couldn’t wait to get back to Aachen, because we had been waiting for it!”

Second place went to Sweden on a total score of eight faults. and the French team finished third on 12 faults, eight of which they picked up in the first round and then they also “lost” a team member when Laurent Goffinet’s Atome des Etisses took an aversion to the triple combination and was eliminated.

So, tFrance only had three riders left, but nevertheless, unlike their fellow competitors. they managed to only pick up four faults in round two.

The German team also only had three riders left in the game.

Everything got off to such a promising start for the home team.

Daniel Deußer and Killer Queen jumped a fantastic clear round right at the beginning.

Then, Marcus Ehning was due to ride second, but unfortunately, he and his horse À la Carte NRW, fell while warming-up.

It was a serious fall, but the paramedics were at hand immediately.

Ehning went to hospital for a check-up, but returned to the stadium shortly afterwards.

He and his stallion are both fine, just slightly shaken.

Christian Ahlmann with Clintrexo Z and David Will with C-Vier collected several faults in the second round and the German team ultimately finished sixth.

The weight of the ultimate podium finish fell to the anchor combination of Kraut and Baloutinue, who needed to cross through the timers fault-free to ensure the team took the win over Sweden.

Using her wealth of experience navigating difficult tracks at Aachen over the years, and with Baloutinue still feeling fresh after the first round, Kraut guided the impressive gelding to a fault-free effort, leading the team to victory.