Laura Chapot celebrates her return to competition with two wins at the Devon Fall Classic.

DEVON, Pa.--Laura Chapot of Neshanic Station, N.J., celebrated her return to riding after seven weeks sidelined by a badly broken arm by winning both the 1.40m Jumpers and the Welcome Stake at the Devon Fall Classic on Sept. 16. 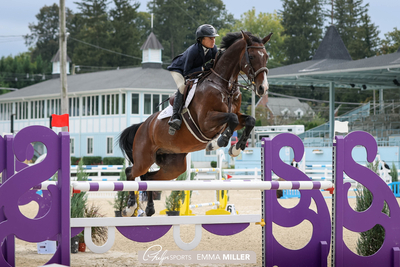 Laura Chapot on Diarado's Flying Dutchman (Photo by Emma Miller) Chapot broke her arm in a fall at HITS in Saugerties, N.Y., and the doctor at the local hospital said she would be out for at least a year and that there was nothing he could do for her.

Luckily, the next day a fellow competitor told her that he traveled to New York City to the Hospital for Special Surgery regularly, and he said, if he was able to get her an appointment, would she like to go.

She said absolutely, and they left the next morning at 4:30 a.m. to drive to New York.

"They took the rotator cuff out, repaired it and put it back in," said Chapot's mother Mary.

"They put a plate in to cover the fracture, and nine screws," said Chapot. "They all stay in. I have full use of the arm now. I rode Monday, Tuesday and Wednesday before today."

MARY HAD SAID before Devon that Laura would ride in the 1.40m and then see how she felt.

Chapot rode Diarado's Flyinf Dutchman in the 1.40m, time first jump-off and won it, then deciding she would ride in the Welcome Stake.

"We've had Flying Dutchman for about a year," said Chapot. "We got him just as Covid began, so he missed all last summer. It took a little time to get to know him. He finished Florida well last winter, and he started the summer well. He was second in the Grand Prix at Lake Placid before I got hurt."

"He's never been to Devon before, and I was a little worried about going to the fence at the end of the ring, with the Ferris wheel and all the activity there in front of him, but he was good and stayed focused. He's really scopey. The hardest thing with him is keeping his attention."

Chapot rode Calafornia to win the $5,000 Welcome Stake, a jump-off class in which competitors immediately jump-off following a clear round.

"I've had Calafornia for a number of years," said Chapot. "He was Circuit Champion at the Winter Equestrian Festival. We get along really well. He's my kind of horse. We've established a bond,"