BRIDGEHAMPTON, N.Y.--Alex Matz of Coatesville, Pa., won the Hampton Classic’s $73,000 Cup on Saturday, Sept. 4 as he rode Erdento Van De Leeuwerk to the only double-clear ride in a field of 29 riders. 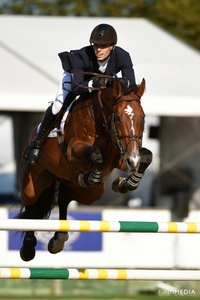 Alex Matz on Erdento Van De Leeuwerk (Photo by Kind Media) The challenging 15-effort, 1.60m course designed by Ireland’s Alan Wade set a tight time allowed of 76 seconds, and only two entries returned to jump off for the win.

Daniel Bluman, riding for Israel, was the first to return on Colestina H, and he had the faster time of 38.390 seconds but had a rail at the last fence for a four-fault finish.

Matz then jumped clear in a time of 42.090 seconds to claim the win.

“I thought it was a really nice course,” said Matz, son of Show Jumping Hall of Famer and three-time U.S. Olympian Michael Matz and Pan American Games team Bronze Medalist D.D. Alexander Matz. “People had fences down all over the place, so I thought it was fair. The time being so tight made it a bit tricky, so I just tried to hustle as much as I could in the first round while also giving my horse a chance at each of the fences.”

Matz’s blue ribbon in the Cup marks his first victory in a major event at the Hampton Classic, and his third Grand Prix win overall after successful back-to-back weekends at the Lake Placid Horse Shows this summer.

“My strategy going into the jump-off was to try to leave all the fences up,” Matz said. “I didn’t know if I could be faster than Daniel, but I thought I’d try to leave them all up and that luck would be on my side. It definitely changed my thinking a bit when Daniel dropped the rail, but I just focused on trying to have a clear round. I was fortunate that my horse jumped great today.”

“IT WAS A GREAT course,” said Bluman, two-time Olympic veteran and 2017 Hampton Classic Grand Prix champion. “I thought it was challenging. Alan had to test the field a little bit to see how it would hold for tomorrow’s Grand Prix, and he definitely made the course more difficult than yesterday. It turned out to be a really exciting class for everyone.” 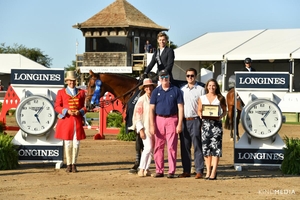 Alex Matz' award ceremony (Kind Media)Three American riders, Georgina Bloomberg, Molly Ashe Cawley, and Carly Anthony, rounded out the top five with one time fault each. Bloomberg was the fastest with a time of 76.790 seconds,placing third on Manhattan.

“This is an important horse show for me, having friends and family here and being as close to a local show as we can get this year,” Bloomberg said. “Manhattan is also a really special horse. Not only because I think he’s a championship-level horse, but also because I rode his mother and father. They’re both horses that I had a good go with during my career, and their son means a little more to me. I’ve been taking things more slowly with him and letting him develop over time, and it makes it even more satisfying to be able to pull something off like today.”

After his competitive finish in the class, McLain Ward still leads the $30,000 Rider Challenge with 418 points.

Rodrigo Pessoa of Brazzil is second with 260 points, and Adrienne Sternlicht is just behind him with 225 points.

The Challenge will be awarded after Sunday’s $300,000 Hampton Classic Grand Prix.