TOKYO, Japan--Roxanne Trunnell of Royal Palm Beach, Fla., on Dolton, a 9-year-old Hanoverian gelding, won her second gold-medal of the Paralympic Games in Tokyo in the FEI Grade I Freestyle to Music, earning an 86.927 percent. 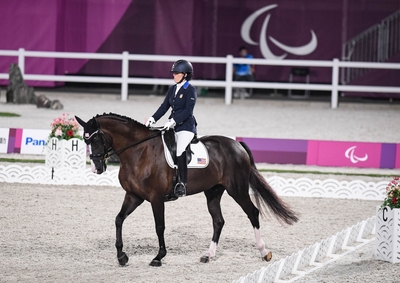 Roxanne Tunnell on Dolton Richards Snikus of Latvia and King of the Dance won the silver medal with a score of 82.087 percent, while Sara Morganti of Italy on Royal Delight won the bronze with an 81.100.

Trunnell and Dolton secured their first gold on Friday in the FEI Individual Test before helping the U.S. Para Dressage Team earn their historic team bronze medal yesterday and will leave Tokyo with two individual gold medals and a team bronze.

Trunnell was last to go in the order of go on the evening of Aug. 29 in Grade I competition and left the best for last to close out the equestrian competition at Equestrian Park in Tokyo, Japan.

WITH THE pressure on, Trunnell and Dolton delivered, securing a Paralympic record to remember.

“He was really with the music and marching today like we really wanted,” said Trunnell. “All of the little points were really there. This means a lot. We moved for Dolton and that was the right choice and this has always been one of my biggest goals.”

The pair, who debuted in 2017, have continued to build their partnership, and with Dolton still very early in his career, the future is incredibly bright.

Trained by Andrea Woodard in Wellinton, Fla., Trunnell and Dolton made significant improvements to their score over the last two years and started to break the 80 percent mark consistently in the last few months.

As for their music, the pair ride to a medley from the Forrest Gump soundtrack, which accentuates Dolton’s impressive walk gait.

“I love it. I didn’t pick the music, Dolton sort of did, and he really loves his freestyle,” she said. “I thought the stretch down today was a highlight because he was really stretching.