TOKYO, Japan--The U.S. Para Dressage Team won the team bronze medal at the Paralympic Games Tokyo, finishing on a total of 224.427, winning the first medal in team competition for the U.S. 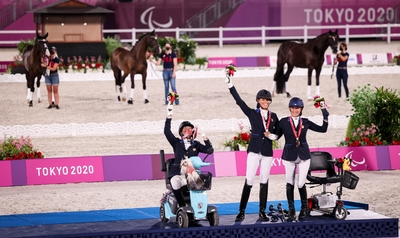 Para dressage bronze medal teamGreat Britain won the gold on a score of 229.905, and the silver went to The Netherlands who finished on a 229.249.

Kate Shoemaker on Solitaer 40 was the final U.S. rider, and she scored 71.825 percent from the ground jury in the FEI Grade IV Team Test to Music to help the team finish on a final total of 224.352.

This is the best team finish for the U.S. Para Dressage Team at a Paralympic Games in the history of the program.

All  three U.S. riders have qualified for the FEI Individual Freestyle to Music on Monday, which will conclude equestrian competition at Equestrian Park for these Paralympic Games

SHOEMAKER of Wellington, Fla., on Solitaer 40, a 14-year-old Hanoverian gelding, anchored the team as the only ride on the second day of competition to round out team scoring with a 71.825 precent in their Grade IV Team Test to Music.

“I think that was one of the best tests we’ve done, so I’m really happy," said Showmaker. "There were a few bobbles here and there, but the overall way of going I was incredibly happy with and I’m super pleased. It was night and day difference from the first night. We tried for an elastic, forward moving way and it wasn’t well-received by the judges, so we went for collection, balance, and correctness today and we showed the potential we have.”

Following Shoemaker’s ride, the team waited for the final rides of the remaining countries to see how the scoreboard would shake out.

With tight competition from Denmark and Belgium, it was a nerve-wracking finish, with the U.S. ultimately contributing high enough scores from each of the three riders to earn the bronze medal.

Rebecca Hart of Wellington, Fla., in her fourth Paralympic Games appearance, this time on El Corona Texel, a 12-year-old KWPN, reflected on the work and progress the team has made over the past sixteen years, as she beamed at her first-ever Paralympic medal.

“This was such an amazing competition." said Hart. "It was so close, and it was a nail-biter until the absolute end. I’m so incredibly blessed and proud to be standing here with these two incredible riders. This was a complete and total team effort. For all the people and our support, our grooms, and everyone behind the scenes that make all of this happen, to be able to finally, after all these years, get to stand on that podium representing our country is so fulfilling. It’s a lifelong dream that has just come true.”

Roxanne Trunnell of Wellington, Fla., on Dolton, a nine-year-old KWPN gelding, led the team’s efforts, breaking the 80 percent mark for the second time this week in her Grade I Team Test to Music Saturdayevening.

“For me, there wasn’t pressure because what happens, happens you know,” said Trunnell.

Hart laughed and said that Trunnell is the rock of the team because the rest of the team was on the edge of their seats throughout the evening’s competition.

Michel Assouline, who is managing his first championship as Chef d’Equipe for the U.S. Para Dressage Team, was thrilled with the outcome and the performances of his three team combinations.

With the team securing their first Paralympic team medal, Assouline is ready to build on this momentum looking ahead to the short quadrennial ahead of the Paralympic Games Paris 2024.

“I came with a mission to lead these wonderful athletes to the Paralympic podium," said Assouline. "I just didn’t know it would happen in a relatively short spell but with such amazing overall support and talent the dream became true. We will continue to deliver our best tomorrow on the final day of competition here and will immediately start looking ahead to the World Championships next year and Paris 2024 so we can continue to deliver success for this program and team.”

Beatrice de Lavalette of Lake Worth Beach, Fla.), on Clarc, Kate Shoemaker on Solitaer 40 and Roxanne Trunnell on Dolton will all return Monday to contest the FEI Individual Freestyle to Music on the final day of equestrian Paralympic competition.