TOKYO, Japan--With three clear rounds at least the U.S. Eventing team moved up a few slots from eighth to fifth, but with a little effort each of those three riders could have cut out a few time faults, and if each of them had gone without time faults the team would now stand second after cross country. 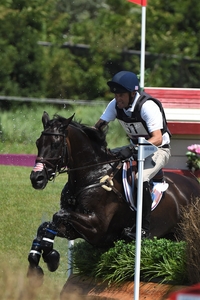 Boyd Martin on Tsetserleg (Photo by Sarah Miller for Macmillan Photography)Not one of the three made an effort to gun their horse to the finish line after the last fence, which would probably have cut two to three seconds off each of their times.

You saw riders from other teams land over the last fence and kick on towards the finish line, but each of the three U.S. riders just kept galloping at the same pace after the last fence.

All the riders and the chef d'equipe sounded delighted with their results.

Is the U.S. just at the Games to finish or is the Eventing team in Tokyo to win a medal?

What happened to our great teams of past years with riders like Bruce Davidson, Mike Plumb, Mike Page, Kim Severson and David and Karen O'Connor.

We're relying on two Australians who moved to this country for all our Eventing teams. Where are our American riders?

DOUG PAYNE on Vandiver led off the team as the third rider on course and finished with 6.8-time faults to score 39.80. 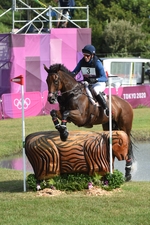 Doug Payne on Vandiver (Photo by Sarah Miller)As only the second to ride the course, as the first rider from Thailand had had a fall and been eliminated, Payne had an excuse for a time fault as no one was sure at that point how the course rode.

Phillip Dutton on Z finished with 4.8 time to score 35.3 and stand 17th individually.

The team is fifth with 109.40 penalties heading into the stadium jumping on the final day of competition.

Great Britain, with its riders, Oliver Townend on Ballaghmor Class, first individually on 23.6, Laura Collett on London 52m third individually on 25.8, and Tom McEwen on Toledo de Kerser, sixth individually on 28.9, all finishing on their dressage scores, stand first as a team on 78.3 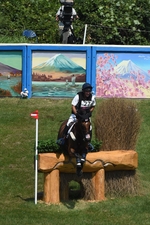 Phillip Dutton on Z (Photo by Sarah Miller)Switzerland, Japan, Brazil, and Poland had one rider eliminated while Thailand had all three riders eliminated and Sweden withdrew after two riders were eliminated.

As the lead-off combination, the pressure was on Payne to path find for the team and provide feedback on how the combinations rode and where the following two pairs could shave off time.

“It was incredible," said Payne who was moved up onto the team after Elizabeth Halliday-Sharp'sDeniro Z was hurt. "I couldn’t be happier to have Quinn [Vandiver]. He has the biggest heart of any horse I’ve had the opportunity to work with. He can be a bit unconventional at times, but he tries his heart out and that’s all you can ask for around a course like this. The first minute you had to accept that you were going to be down, and the rest was how quick and efficient you could dare to be with how your horse felt. He was excellent though and I think a clear here was the most important thing with no drop score to fall back on.” 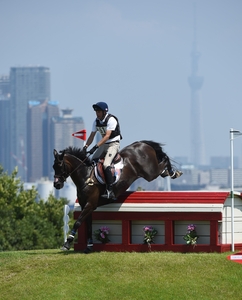 Boyd Martin on Tsetserleg (Photo by Sarah Miller)In his seventh Olympic Games, Dutton had started his run before being held by the officials as they tended to another rider after a fall.

“It went well," said Dutton. "When you’re going that fast, you’ve got to take some chances, and I had a bit of a last life at the last water, and I got held on course, which is not ideal when you have to stop and start again, but he’s a great horse with a big heart and I think that it couldn’t have gone much better. This was a lot of hard work with the turns, accelerating, and slowing down, but we knew that coming in, and needed to get the horses fit and prepared for that.”

Martin said the course design with the twists and turns wasn’t a particular strength for Thomas.

“It's a big sigh of relief getting around well," said Martin. "Thomas tried his absolute heart out. It wasn't a course that suited him that well with the twists and turns, but he dug deep. He finished well, and proud to be an American. Three American horses finished well today.” 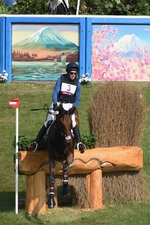 Doug Payne on Vandiver (Photo by Sarah Miller)The team’s Chef d’Equipe Erik Duvander was pleased with how each combination tackled the course and ultimately improved their team position heading into the final day of competition.

With the jumping phase ahead, the team will focus on recovering the horses this evening and will set their sights on delivering for the U.S. once again tomorrow.

“We succeeded with improving our position from the dressage with three clear rounds," said Duvander. "I am very happy with how our riders rode on cross country today. Tactfully, they went as fast as the horses allowed them to go on this type of track and in the hot conditions. All horses finished well and look happy back in the stables at the main venue.” 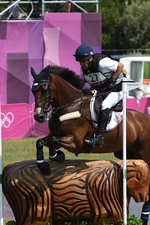 Phillip Dutton on Z (Photo by Sarah Miller for Macmillan Photography)Eventing competition will conclude tomorrow with team and individual medal honors being awarded.

Team competition will take place first, beginning at 4:00 a.m. EDT, 5:00 p.m. JST, before the top 25 combinations return for a second jumping round for individual medals under the lights at Equestrian Park starting at 5:45 a.m. EDT., 6:45 p.m. JST.