U.S. stands eighth before tonight's cross country, but only 16.3 points behind

TOKYO, Japan--Boyd Martin on Tsetserleg was the final combination of the three-man team of the U.S. Eventing Team in dressage at the Equestrian Park in Tokyo, Japan,and scored 31.1 to leave the team in eight place  heading into the cross-country phase, which will begin at 6:45 EST tonight, which is 7:45 am Sunday in Japan. 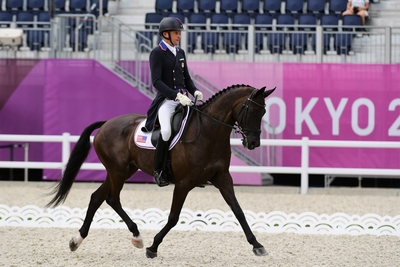 Boyd Martin on Tsetserleg (Photo by Sarah Miller, Macmillan Photography)Martin usually has good scores in dressage on Tsetserleg, but two faults in his test that only received scores of 4 dropped him down.

In picking up the counter canter, Martin picked up the wrong lead for a few strides, and also had a problem in the halt.

MARTIN of Cochranville, Pa., and Tsetserleg are the team’s anchor in all three phases, and Martin was anticipating delivering a better test with the seasoned 14-year-old Trakehner gelding, but a few uncharacteristic mistakes dropped their score below their average mark. 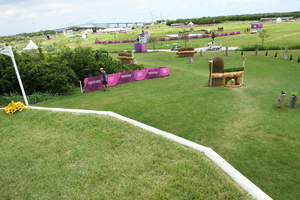 XC overview (Photo by Allen Macmillan)“To be honest it's quite disappointing," said Martin. "Thomas has been so good in the dressage for years and years and we had great work in there and then there was one moment in the rein back where he fell behind me and misunderstood me and cantered out, which screwed up the next movement. It was some great moments and some disastrous moments. You always come here hoping to give a personal best.”

But the team is already focusing on the phase ahead, which is notably a strong phase for all three combinations, with Vandiver, Z, and Tsetserleg all accomplished campaigners at the top level of the sport with tremendous experience.

The Derek DiGrazia-designed track is expected to be challenging and will be influential with the standings, and the team is looking to deliver three fast, efficient rounds to help push them up back up the leader board. 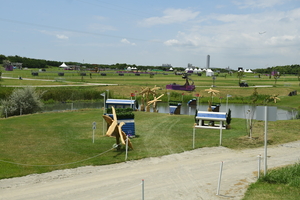 XC water (Photo by Allen Macmillan)“The cross-country is so difficult tomorrow, and it will be hard to get the time," said Marin. "I believe we're in with a chance if we can deliver three good rounds of cross-country. We've got three good, seasoned horses who are older and experienced, so I think we've got nothing to lose by going out there and giving it a crack.”

Japan has been very hot, and how that heat will affect horses on cross country will be a factor.

With only three riders per team, tonight's cross country and tomorrow's vet check will be crucial, as any elimination eliminates the team. 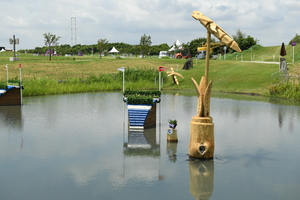