U.S. is ninth of 14 teams after two riders in Eventing dressage

TOKYO, Japan--Doug Payne of Rugemont, N.C.,, on Vandiver, a 17-year-old Trakehner gelding, and Phillip Dutton of West Grove, Pa., on Z, a 13-year-old KWPN gelding, were te first two of the three U.S. Event riders to compete in dressage, and both had mistakes to score 33 amd 30.5 respectively and stand 18th and 12th of the 35 riders who have gone. 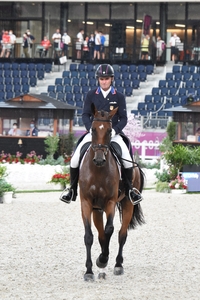 Phillip Dutton on Z (Photo by Sarah Miller for Macmillan Photography)This left the U.S. in ninth place of the 14 team competing, certainly a less than stellar start.

There are a couple of bright spots, though.

Boyd Martin of Cochraville, Pa. on Tsetserleg, who has in the past scored well in dressage, goes this evening and, if he has a good ride, could pull the team standing up.

Then, also, despite the fact that the U.S. is ninth, the team  is only 14.5 behind Great Britain, the top team, and considering how quickly time faults mount up in cross country, that's not an insurmountable amount.

But with only three riders per team instead of the usual four, there is no discard score and thus no room for any mistakes.

Any elimination on cross country eliminates the team.

In the dressage, Payne, on the flying change across the diagonal from the left to the right lead, Vandiver didn''t change behind for a couple of strides.

For Dutton, Z didn't stand stock still at the halt and also had one change of lead that was a little ragged.

OLIVER TOWNEND of Great Britain, who has won the 5* in Lexington, Ky., for the past three years, leads on Balllaghmor Class  with a 23.6 score, and his teammate Laura Collett on London 52 is fourth with 25.8. 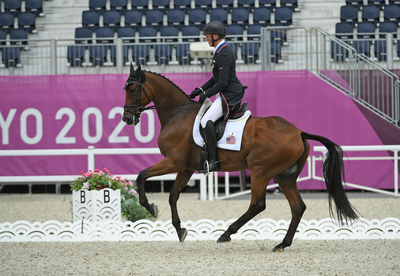 Doug Payne on Vandiver (Photo by Allen MacMillan)Collett had a nearly fatal fall a few years ago when a horse fell on her, and she had to be resuscitated five times in the ambulance on the way to the hospital,, then while recuperating, a sliver of bone worked its way through her bloodstream to her eye, and she is blind in her right eye.

Despite all that, she is today a top contender who has placed high in 48 and 5* events.

Germany, which was the big favorite going into the Olympics, stands fifth after two  riders.

Julia Krajewski on Grovine de Reve stands third individually on 23.9, but Sandra Auffarth on Viamont Du Matz scored 34.10 after she picked up the wrong lead for two strides when picking up the counter canter and then also had a poor flying change of lead on the diagonal.

But Michael Jung, the former world number one rider in Eventing, is yet to go and will certainly pull up his country's score.

The U.S. Eventing Team drew fourth in the order out of 15 teams, and riders will go in the same order of go in cross country as in dressage.

“I was very happy with Vandiver  in there," said Payne. "I think out of all three phases this is the toughest for him, but he put forward a great effort and honestly, in the end it’s all you can ask for, and I was pretty excited to get that finished and onto the next, and there’s a lot more left ahead. I think he was about as settled as he’s been going in and it’s a credit to the facility here. We’ve been here long enough, and he’s been able to see it all, but he stayed settled and rideable. He’s the most genuine creature and really tries his best all the time.”

Dutton's mount, Z, is typically an excitable gelding, but he was very settled and workmanlike in the big arena, and Dutton said that his focus and willingness was spot on during their test.

“I couldn’t be prouder of him," said Dutton. "Traditionally, he’s gotten a bit revved up and excited in the bigger stadiums and arenas, and he was right on the money today. He was listening to me and very obedient. It was a pleasure to be a part of that test with him.”

Chef d’Equipe Erik Duvander was pleased with the team’s showing on the first day and said that their overall score will give them confidence for Sunday’s test of Derek Di Grazia’s cross-country track at the Sea Forest Cross-Country Course.

The cross country is live hree Saturday evening, as Tokyo is 13 hours ahead of us.

“Doug and Vandiver scored within the range of our expectations," said Duvander. "Phillip Dutton rode a much-improved test on Z from Kentucky, so we are very pleased with his performance. We have walked the cross-country course now several times and have a very clear picture of the course. After Boyd’s test, we will walk as a team one final time to finalize our strategy. The team has no thoughts of holding back.”

Cross-country will take place on Sunday, Aug.1, beginning at 7:45 a.m. JST or 6:45 p.m. EDT on Saturday, July 31 taking the time change into consideration.