TOKYO, Japan--Sabine Schut-Kery on Sanceo placed fifth in the dressage Grand Prix Freestyle competition for individual medals, finishing on her third best personal score of the week, scoring an 84.300 percent. 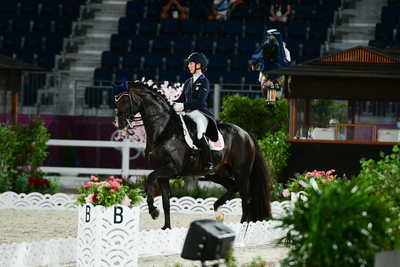 Sabine Schut-Kery on Sanceo (Photo by Allen MacMillan)Steffen Peters on Suppenkasper recorded an 80.968 percent to finish in the top 10, while Adrienne Lyle, who was one of the 18 who had qualified for the Freestyle, pulled out prior to the competition, saying that her mount, Salvino,, just didn't feel right.

Germans won the gold and silver as Jessica von Bredow-Werndl on TSF Dalera put in another superb performance to score 91.732 and, in a bit of an upset, beat her teammate, Isabel Werth, known as the Queen of Dressage, who had saved everything for the Freestyle, but only scored 89.657.

Great Britain's Charlotte Dujardin, who had won the two previous gold medals, but was on a new, fairly young mount, Gio, won the bronze, scoring 88.549, and Catherine Dufour of Denmark on Bohemian was fourth on 87.507.

SO BREDOW-WENDL, riding in her first Olympics, beat two the two riders who had accounted for most of the past several years gold medals in the Olympics.

Werth, who had clearly not gone for her best in the qualifying and tea competitions, was thrilled with her performance but still came up a little short.

Schut-Kery, who had excelled in the ream competition to give the silver medal to the U.S. over Great Britain, had one mistake in the Freestyle when Sanceo broke from the canter for a couple of strides.

Despite that mistake, Schut-Kery and Sanceo, who haven’t performed their Freestyle since 2018, rose to the occasion to score a huge improvement on their previous personal best in the freestyle.

“It comes down to the fact that he’s there for me and I really do feel like we have an incredible partnership," said Schut-Kery. "He’s just sensitive, but not over-reactive, simply, he lets me guide him and lets me be the leader. My husband made this music for me. The first song with the piaffe and passage is from the Last Samurai, so it’s very fitting and I just love it. It has some elegant pieces and I think it really resembles Sanceo.

Peters and “Mopsie” have a very modern and upbeat musical arrangement that Peters as said reminds him both of his struggles and of his excitement and energy for what’s to come.

“Mopsie gave me everything yesterday," said Peters. "Every single ounce of cooperation and he fought for our team. It was a clean test and almost an 81 percent so we’re happy. The beginning of the music is ‘It’s Going to Be Okay’ by James Blunt, and personally, I’ve gone through a couple of rough years and my wife always kept telling me, 'It's going to be okay,' so to honor her, I picked that music and also included the music I used with Ravel in 2009 when he won World Cup Finals. I figured after twelve years it was eligible for recycling.

The most important thing, though , was that the team won the team silver, the culmination of a massive group effort to ensure the team’s success.

As Peters said, they had dreamed of winning a bronze, and the reality was better than the dream.

“What an incredible few weeks we’ve all had together, and I am just so proud of this entire team,” said chef d'equipe Debby McDonald. “We came into these Olympics knowing that we could really deliver on the world stage and this historic silver medal is a testament to all of the hard work everyone involved in this program has built upon over the last several years. I am thrilled with our team and the continued momentum we’ve seen year over year at this level.”

Next on the equestrian schedule for the Olympic Games Tokyo 2020 is the discipline of Eventing, which will begin tomorrow with the First Horse Inspection at 10:30 a.m. JST/9:30 p.m. EDT and the first session of dressage taking place on Friday, July 29 at 8:30 a.m. JST/7:30 p.m. EDT.