TOKYO, Japan--A spectacular ride from Sabine Schut-Kery on Sanceo that gave her a score of 81.596, combined with a 76.109 from Adrienne Lyle on Salvino and a personal best of 77.766 from Steffen Peters on Suppenkasper elevated the U.S. dressage team to the silver medal on a total of 7,747. 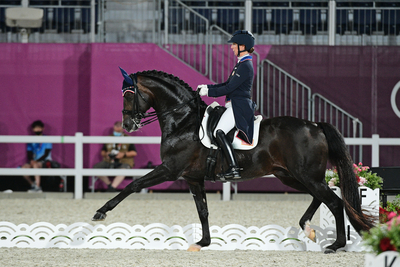 Sabine Schut-Kery on Sanceo (Photo by Allen MacMillan)Germany won the gold medal, as expected, with all three riders scoring in the 80s for s total of 8,178, but it was a very tight battle for the silver and bronze with Great Britain taking the bronze on 7,723.

Denmark was fourth on 7,540, followed by The Netherlands in fifth, with Edward Gal scoring 79.98 percent on the flashy Totilas stallion Total US. Sweden was sixth, with Spain seventh and Portugal eighth.

As a measure of a top dressage horse is worth, Totilas was worth $10 million, and Totsl US is so far his best son.

This was the U.S. team's first silver medal in 73 years, in the London Olympic Games in 1948, after finishing in third for a bronze medal  seven times at past Olympics.

IT TOOK two personal best from Americans along with a mistake from England's top rider, Charlotte Dujardin on Gio.

Gio is small of a top dressage horse, just 16 H, as compared to Suppenkasper, who is 18.2H, and after Dujardin bought him, one of her mentors said, "Why have you bought a pony?" 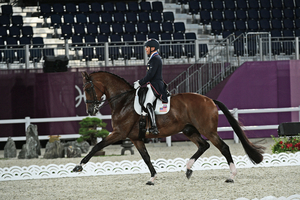 Steffen Peters on Suppenkasper (Photo by Allen MacMillan)Dujardin missed her first two one tempes, doing 2 tempes instead, giving her 4s and 5s for those movements, resulting in a score of 79.54 percent.

Denmark was fourth, after mistakes from their top rider Cathrine Dufour resulted in 77.72 percent, below her usual best.

Lyle  of Wellington, Fla., was first to go for the U.S. Dressage Team, riding early in the first group order, and was mistake free.

“I’m super thrilled," said Lyle. "I was really hoping we could pull off a score like that for the team today. We were a little conservative in the Grand Prix, and it wasn’t our greatest display, so I wanted to come out here and push for a little bit more. Despite the heat and humidity, he was really a good boy and he delivered with no mistakes and that’s what you want for the team test.”

In the second grouping, Peters of San Diego, Calif.,had one of Suppenkasker's best tests to date and improved from their test on Sunday in the team qualifier competition.

“This is exactly what I wanted for my team," said Peters. " It’s one thing to ride individually, but when you pull a good score for your team it’s an incredible feeling. When we came out of the arena, I gave Mopsie a big hug and thanked him from the bottom of my heart. We were seriously in the zone. When we were out there about to go in the ring, I said, ‘Mopsie, please just do what we just did out here in warm-up,’ and we had a good schooling this morning. He did that for me when it counted and it’s an incredible feeling when a horse will fight for you like that in the arena.” 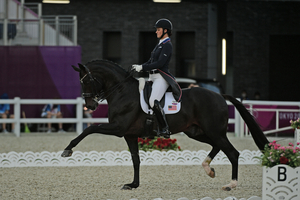 Adrienne Lyle on Salvino (Photo by Allen MacMillan)As the anchor combination for the team, Schut-Kery of Napa, Calif., on Sanceo came up with another stellar performance and a personal best.

“For me, this was my first time here at the Olympics, and it was quite intense to wait that long for the end of the class, but I am so proud of my horse, my team, my owners, and the coaches," said Schut-Kery. "It’s been a really, really great experience and I am still a bit speechless. I was filled with joy and pride. It’s such a team effort. It’s a big relief to deliver for the whole team, not just my teammates, but everyone involved, and it just meant everything. It was just pure happiness.”

Her score was the third highest of the day behind two Germans, Isabel Werth on Bella Rose, 83.3 percent, and Jessica von Bredow-Werndl on TSF Dalera, 84 percent, with the third German, Dorothee Schneider on Showtime FRH, getting the fourth highest score of 80.6 percent.

Schut-Kery, 52, moved to this country and became a citizen to further her dressage ambitions as making a team in Germany is so difficult;

She trains with Christine Traurig. 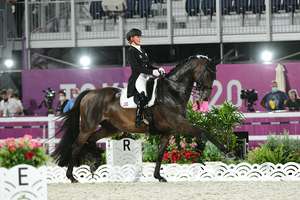 Jessica von Bredow Werndl on SF Dalers (Photo by Allen MacMillan)“I am just so proud of this team, this is truly the dream team,” said chef d'equipe Debby McDonald. “They each persevered and delivered when their team needed them most. I am so elated by their accomplishment tonight, and wow, what a moment to be remembered for this program. We’ll be back tomorrow and ready for our last competition of this journey, which I am so proud to be a part of, and I have to thank all of the amazing coaches, support staff, and owners, as this wouldn’t have been possible without their dedication and unwavering commitment to our athletes and their horses.”