DEVON, Pa.--Clara Propp of New York, N.Y., on Arabesque won the 15 & Under 3'3" Large Junior National Championship and the 3'3" Overall Grand Championship over 213 contestants on July 14 at a competition held at the Devon show grounds. 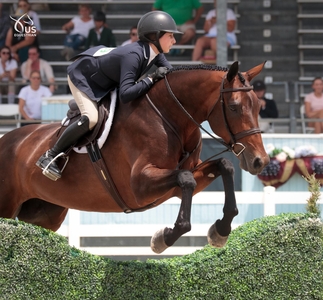 Clara Propp on Arabesque (Photo by Leslie Potter)Propp had the winning Handy Round in the Large Junior Hunter 15 & Under section, giving them the score they needed to place at the top of both the section and the 3’3” Overall Grand Championship.

The pair performed like seasoned professionals throughout the finals, despite the fact that it was a first trip to the Junior Hunter National Championship for both of them.

“She’s only 8, She’s a baby,” Propp said of Arabesque. “She’s never been here before, let alone in this ring, so I’m really proud of her. I took a less handy turn to the first jump because she’s a little less experienced and I didn’t want to scare her going into the ring for the first time ever. But then, as I felt that she was comfortable, I could do all the rest of the inside turns and she was perfect.

“I’ve never been to Junior Hunter Finals before, so it’s a really special first time here,” Propp said. “I plan to have Arabesque for literally as long as I’m a junior. Forever. She’s so great, so I know I’m going to get to do big things with her and eventually move up to the 3’6”.”

“It’s so special [to have trained the champion, especially for her first time doing this on the horses, on a horse that’s never been here before,” said Krista Goossens, Propp’s trainer. “They both really stepped up to the plate. It’s exciting. We’ve been showing all summer, but we’ve kind of backed off the last couple of weeks and just focused on training a little bit to get ready and make sure everyone was feeling their best. Arabesque is one of those horses that really rises to the occasion, so she makes our job easy.”

THE OVERALL Reserve Grand Champion title went to the winners of the Small Junior Hunter 15 & Under section, Campbell Brown of Fayetteville, Ark., on Fleetwood.

Brown had nothing but praise for her horse after her successful showing in Devon.

“He is the sweetest animal in the barn,” said Brown. “He likes cuddles, and my favorite part is the way he moves his lip. He always moves his bottom lip and makes this silly face and shows his teeth and it’s adorable.”

Brown and Fleetwood won the Classic Round on Tuesday, meaning they were last in the order of go for the Handy Round.

It was a little bit nerve-wracking, Brown said, but the handy was a chance to really shine.

“My favorite is to handy on him. He loves to turn,” said Brown. “Winning Overall Reserve Grand Champion was better than I could have imagined. Fleetwood is perfect. Hopefully we just keep continuing to have fun and success will follow.”