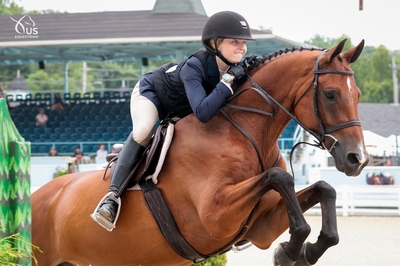 Kat Fuqua on Grand Remo (Photo by Leslie Potter)Fuqua was among the 324 Junior Hunter entries competing in the East Coast final this week, marking a record number for the event, which returned to Devon for 2021 after a year away due to COVID restrictions.

Torano had high praise for Remo and for Fuqua, who also competed this week in the Small Junior Hunter 15 & Under section with her Westphalian gelding, Consent.

“We had a plan going into this. The horses came here last week to really gear up for this championship,” said Torano. “You can only call on these horses a certain number of times, so this was really our goal. Both horses stepped right up…these horses continue to go out and try to win every time.

“Kat is a real talent,” Torano said. “This didn’t happen by accident…She is a real talent with great horses and her parents back her. I think we have a good group behind us with the grooms, and I know these horses like the back of my hand. I think it is a whole team event that came to a head today.”

TUESDAY'S competition day started off with thick fog and occasional light drizzle, providing some relief from July temperatures, while the 3’6” entries completed their Under Saddle and Handy Hunter Rounds in the Dixon Oval.

Fuqua and Remo were ahead going into the Large Junior Hunter 15 & Under Handy Round on Tuesday afternoon after turning in a polished Classic Round on Monday and winning the Under Saddle on Tuesday morning.

“I was actually very nervous going into the handy because I had won the hack and the classic, so it was a lot of pressure; I wanted to be champion” she said. “I always mess up the trot jump or chip the trot jump, so that was our main thing we were focusing on, and Remo was perfect!”

Grand Remo is a 2011 Dutch Warmblood gelding that Fuqua has owned and showed since 2019.

Fuqua had competition  from Alexa Lignelli of New York, N.Y., on High Society who performed nearly flawlessly in the Handy Hunter round on Tuesday afternoon, earning 90s from all three judges, and that gave her first place in the Handy.

Those points were enough to give her reserve for the section as well as winning them the 3’6” overall reserve grand championship.

“He is such a special horse,” Lignelli said of High Society. “I’ve only had him since August of last year…he is an amazing horse and we clicked immediately He is also special because of his jump and his style around the ring. He can really feel the atmosphere and thrives off of it. So today, with the crowd and the beautiful atmosphere, he really shined.

“It means so much to me to be Reserve National Champion. The whole team works so hard,” said Lignelli. “The occasion is so fun, and my horse was amazing. He deserves all the credit.”

For being the top finishing mare in the 3’6” sections, Sweet Caroline was awarded the War Dress Memorial Trophy.

Sweet Caroline was ridden by Grace Debney of Hampden, Mass., in the Small Junior Hunter 16-17 section where they finished as the reserve champion pair.