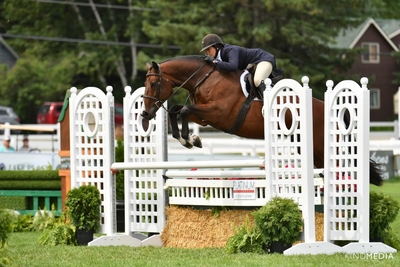 Judges Scott Fitton and Leslie Emmerson (Panel 1) and Scott Williamson and Kevin Giblin (Panel 2) scored Steege and LaFitte on top in both rounds, giving them a score of 182 in the Classic Round and a score of 204 in the Handy for a two-round total of 386.

“HE WAS just so relaxed and so happy to be out on the grass,” Steege said. “This is his third year showing here and he’s been champion in his division every year but this is the first time I’ve ever shown him in this big grass field. I was really looking forward to it.

“It wasn’t on the course chart that you had to hand gallop the last fence but it seemed appropriate to me with that long run to the last jump to show off his gallop a little bit," said Steege. "The handy felt so smooth and easy, it almost felt like he knew the course. I just have to think what I want to do and he seems to know it.”

“Amanda rode as she usually does with her classic hunter style,” said judge Scott Williamson. “She really rose to the occasion.”

Finishing second with a total score of 373 was Jean Sheptoff on her Camillo VDL. Third place went to Jenny Jones on David Raposa Sales LLC’s Highlighter with a score of 360.