DEVON, Pa.--Scott Stewart of Flemington,, N.J., was the Leading Professional Rider during week one of the Brandywine Horse Show, July 1-4. 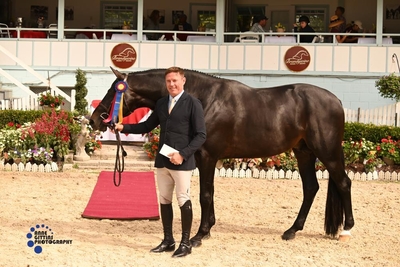 Scott Stewart took top honors on several different mounts, including Dr. Betsee Parker’s Charlemagne, who captured the championship title in the Green Conformation Hunter division out of a competitive group of horse-and-rider combinations.

“It is always exciting to win the Leading Professional Rider title," said Stewart. "I wasn’t really expecting it, and to be honest, I didn’t even know there was one here, so it was a nice surprise and I was really happy about it!”

“Charlemagne is only 7 years old, we bought him when he was 4 years old and he did the Pre-Green division as a 5-year-old," said Stewart. "He actually only showed three times last before COVID, and then I didn’t show the rest of the year. I keep forgetting how inexperienced he is because he is so mature, when really he has only shown at the Winter Equestrian Festival, Kentucky and the Upperville Colt & Horse Show. He doesn’t have a huge amount of experience, but he is pretty laid back and acts pretty grown up on the time. I was excited for him being champion, and it was nice to get into the Dixon Oval since we haven’t been able to do that the past couple of years. The courses were awesome - they are always so nice at Brandywine and it is always nice to get out in that ring.”

“I thought the First Year Green Hunter division was very competitive," said Stewart. "There weren’t that many in it, there were only 11 or so, but it was all top horses and riders so it felt like how the Devon Horse Show might have been this year! I was really happy with my horses and the show ran really nicely. Even though it was warm weather, the days were nice and I thought they did a great job!”

ALSO DURING the first week of the two weeks of the show, the Grand Amateur-Owner Hunter Champion was awarded to Caroline Kellogg aboard her mount Herodios V, a 9-year-old Dutch Warmblood stallion, after an almost clean sweep in the Amateur-Owner 18-35 division. 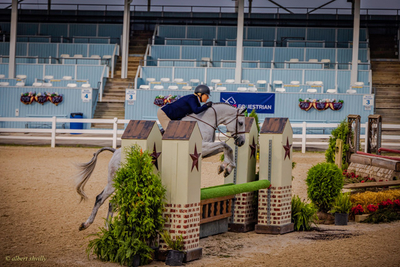 Clemintina Brown of Kennett Square, Pa,, was champion in the Amateur Owner 3'3". 35 and older section, and she also won a class in the Adult section on her young horse, Monarch.

Ariana Marnell on Casino Cash dominated the Small Junior 3’6” Hunter division, capturing the top three placings in each class to secure the Grand Junior Hunter title during Week One of competition.

Casino Cash, an 8-year-old Holsteiner gelding owned by Marnell Sport Horses, impressed the judges with his expression and beautiful jump.

Top hunter derby riders took to the Dixon Oval to vie for the lion’s share of prize money in the $5,000 Open USHJA National Hunter Derby, presented by Lissa Tepas.

Michael Britt-Leon aboard Kelly Sims’ Bacchus, an 8-year-old Hanoverian gelding, laid down a beautiful first round helping them secure a score of 89 , later earning a handy round score of 94 to emerge victorious out of a competitive group of horses.

Alexa Bing and Subtil, her own 15-year-old Selle Francais gelding, were the winners of the $5,000 National Junior/Amateur Hunter Derby, earning scores of 94 and 92 for a 186 total. T

Mclean and Falling Moon Front Page would continue to impress the judges during the handy round, riding to a second round of 85 from the judges, which would ultimately lend them the win.

For a full list of results from Week One of Brandywine Horse Shows please click here.
FROM THE WINNERS CIRCLE