SAINT-TROPEZ, France--Jessica Springsteen added to her resume for being named to the U.S. show jumping team for Tokyo with a win in the Gulf of Saint-Tropez’s CSI 4* Grand Prix while Beezie Madden, in her first European show this year, placed sixth on June 13. 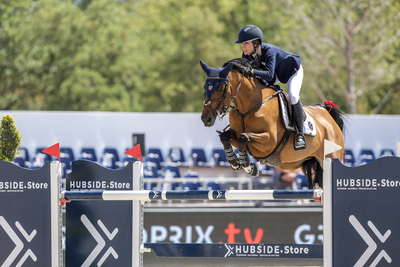 The stars such as France’s Julien Epaillard and Germany’s Christian Ahlmann didn’t make it past the first round.

Switzerland’s Edwin Smits on Farezzo was the surprise in this Grand Prix and was first to jump clear, and as a result, he had the difficult job of going first in the jump-off, but the Swiss rider proved he was in fine form and was double clear.

After him, Jérôme Hurel, one of the three French riders qualified, with Byron du Telman, had one down and any chance that he had of winning went out of the window.

SPRINGSTEEN on Rmf Tinkerbell set a very high standard and greatly improved on the Swiss rider’s time, shaving 4 seconds off the time to beat.

Austria’s Max Kühner on Eic Coriolis des Isles gave it his all and was also double clear, but was three seconds slower than the incredibly fast Springsteen.

Madden on Garant, who jumped clear, was five seconds slower.

The riders from the Auvergne-Rhône-Alpes could have eventually represented a threat.

Loire’s Olivier Perreau, who was second last to go on Venizia d’Aigully, missed out winning by twenty-four hundredths of a second, and Mégane Moissonnier on Cordial also lost any hope of victory as she was almost three seconds slower.

Despite this, they finished second and third respectively in the Hubside Jumping Summer Tour’s first 4* Grand Prix.

“I’m delighted," said Springsteen. "Tinkerbell jumped superbly, in a very regular and constant way. She deserves to win this 4* Grand Prix. I am really pleased how things went here today! The first round wasn’t too easy and I realized that it wasn’t going to be a walk in the park for my mare. But she is really big-hearted and gave it her all.

"In the jump-off, I was the third rider to go out of seven, so I had to take all the risks," said Springsteen. "But she is very fast naturally and very willing, so both of these qualities were a huge advantage. We will see if this result will have an impact on my Olympic selection. But I am not going to put myself under pressure; I aim to have regular results, and I’ll see if the selector has watched this Grand Prix. I’d be surprised if he didn’t, but I don’t want to speak on his behalf,” she said.