UPPERVILLE, Va.--Alison Robitaille on Tuesday, June 8 placed first and second in the 1.40m Open Jumpers with Happiness and Cocobelle 3, respectively, over a field of 25 entries, many of whom are preparing for Thursday’s $30,000 Upperville Grand Prix. 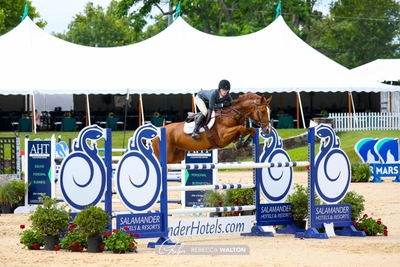 Alison Robitaille on HappinessEarly in the class, Cathleen Driscoll set the time to beat with a double-clear effort aboard Plain Bay Sales’ Consul, finishimg in 31.24 seconds.

That time held up until Robitaille on Happiness, using her new mount’s quick foot speed and making inside turns, she was able to take the lead. clean in 30.5 seconds.

Robitaille was also the last to go on Cocobelle 3, and while she was already guaranteed to win the class, she still finished in 30.80 seconds to place second place, while Driscoll moved to third place.

“Happiness is a very experienced horse and she has a big stride," said Robitaille. "I did not even feel like she was going that fast, so I knew I could trust her to go inside everyone else’s tracks.”

“SHE CAME over in March so this is my fourth or fifth show with her," she said. "She is very chill and not spooky going into a new ring. I did not try her when I bought her, I bought her off of the video! I am feeling like we are melding into a good partnership. I don’t think of myself as a “catch rider.” I know my horses and have a relationship with them, so this is another great step in that direction. She went so well today, I am not sure if she will go again tomorrow. She will definitely make an appearance in the National Grand Prix.”

“CocoBell is 8 years old and just moving up to this 1.40m level." said Robitaille. "I also got her recently, in January. When I am in Florida, I fly back and forth the whole time because my children are still in school in Virginia, so it has been really nice in the spring to have my horses in one place and to be able to ride them everyday and feel like we are really making good progress. She finished up competing in Kentucky really well and I felt like she came right in and built off of that.”

“It means a lot to me to be back competiing at Uppperville this year." she said. "I am so happy that they were able to put on the show this year. I missed competing here last year. It is always nice to be able to show at home, but that also makes it a little more hectic for me because I am also busy being a mom and taking care of my children with their activities. Being a mom means having to compartmentalize your roles but I am grateful to be able to be at home and be with my children and also be able to come to a world-class horse show to compete.”

Despite missing the class course walk, Robitaille was able to compartmentalize and refocus when she arrived at the show with both her new horse Happiness and Cocobelle 3, an 8-year-old Oldenburg mare, who is just moving up to the 1.40m division, and claim both of the top ribbons.

Earlier in the day, Brooke Kemper, who was raised in McGaheysville, Va., and is now based out of Ocala, Fla., and Keswick, Va., won the Rising Star Stakes aboard Andra Sinclair’s TikTok Z.

She was the only double clear performance, and TikTok Z also won the young horse class Monday to capture the division’s championship title.

She was thrilled with her brave, young mount’s performance and is looking forward to developing him for the future of the sport.

International competition at the Upperville Colt & Horse Show will begin Thursday with the $37,000 FEI 4* Power & Speed Stakes, followed by the $30,00 Upperville Grand Prix.

Evan Coluccio on Pritchard Hill won the Grand Hunter Championship, awarded to the horse acquiring the greatest number of points in one or more rated divisions. 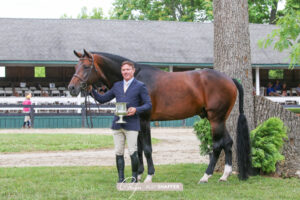 Pritchard Hill acquired points in the High Performance Conformation division, winning two firsts and two seconds in the over fences classes and handy round, while also winning the under saddle class.

Stewart was also champion or reserve in almost every other professional hunter division.

“We had a great couple days showing," said Stewart. "All my horses went great, I was champion and reserve in most of those divisions. It’s always nice to ride out there, the courses today were especially well made and beautiful – the horses really jumped. My first horse this morning got a 90 and a 94 which was great at 8 o’clock in the morning. It’s always great to come here, and the leading rider is in Charlie Weaver’s memory which is great. I grew up watching him ride so I always look up to him and that is really special to win that.”