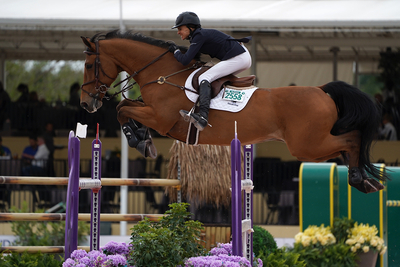 Laura Chapot on Chandon Blue at WEF (Phoo by Spotfot)Second to go in the jump-off, Chapot set the time to beat of 35.970, which held up for the win.

Chapot also placed fifth on Thornhill Kate as the fastest of the four faaulters,, and 10th on Diarado's Flying Dutchman.

"It was a good course," said Chapot. "It rode a little harder than it had walked. My horse handled it really well."

"THORNHILL KATE had an unlucky rail in the first round." said Chapot. "She just  touched the out of the combination, and it came down."

Diarado's Flying Dutchman is a relatively new ride for Chapot, a horse that she has had for about a year.

"He was second in the Grand Prix last week," said Chapot. "He was a little nervous this week. He jumped pretty well, but he got nervous in the middle of the course. He's new to grand prix. He's a little green, but he has a lot of talent. We're trying to get him more confident, not so nervous. He has to get it together mentally."

Chapot wasn't able to compete in the 50,000 Grand Prix on Saturday as her sister Wendy Nunn was judging,

We were planning to be at Devon this weekend, so when she was asked Wendy said she would judge the FEI section, said Chapot.

Obviously, the Chapot's plans changed when Devon was cancelled, but Wendy had already agreed to judge.

Adrienne Sternlicht on Cadans Z won the $50,000 Grand Prix in the jump-off time of 37.48 over Kevin Mealiff on Tupac van de Vrombautshoeve in 38.45 with Jonathan Corrigan third on Super Chilled in 38.87,