ROME, Italy--The U.S. show jumping team of Kent Farrington, Jessie Springsteen, Laura Kraut and McLain Ward finished a close fifth, just 1 fault off the podium, in the Nations Cup in Rome on May 29. 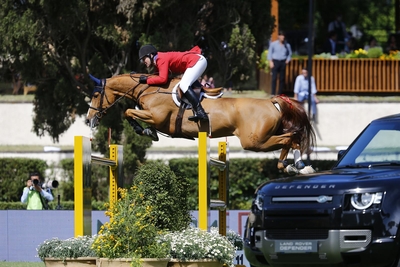 McLain Ward on Contagious (Photo by Steano Secchi)"I was pretty happy with the results," said chef d'equipe Robert Ridland. "This is the beginning of out first phase of training for the Olympics. We're out of our comfort zone in Florida, and now we're up against the best in the world. The second round in the Nations Cup was very encouraging."

"LAURA HAD a little bit of bad luck in the first round," said Ridland. "Her horse lost a shoe. She'd completed her warm up and was ready to go in the ring. We didn't even realize she'd lost a shoe until we did the last minute check. Then we couldn't find the shoe. Horses usually lose a show jumping and you can hear it come off, but it wasn't by the fence. So the blacksmith had to make a new shoe. That dropped her way down in the start list, and they said she had to go right before McLain. So she only had time to jump a couple of fences before she went in the ring. It completely disrupted her warm up."

"But everybody put it together in the second round," said Ridland. "Gazelle jumped two good rounds. It was just a light touch that had the fence down in the second round. Kent didn't even know he'd had it down. This was a good result for our first testing of the waters over here."

The course was technical and challenging, so after the first round two teams, Germany and Belgium, were tied on 0 faults while five teams, the U.S., France, Brazil, Sweden and Mexico, were tied eight faults.

"Kent won both the Thursday grand prix and the Saturday grand prix on Credence," said Ridland. "They're all going to ride their Nations Cup horses in the 400,000 Euro grand prix Sunday. They have to get used to using the same horse in all the big classes, getting ready for all the competitions at the Olympics."

There are two more selection trials, one in Sopot, Poland in two weeks and then at Rotterdam, and the team will be named the last day of Rotterdam, July 4.

Normally, the two highest scoring team of The U.S., Canada and Mexico qualify for the Finals

That leaves just one trial,in Mexico, which is tentatively scheduled after the Olympics in August, but it's still unclear whether that trial will be held.

"It would be hard for any of the three teams to get a good team for a trial right after the Olympics," said Ridland. "I would hope that the FEI, out of fairness, would just let all three teams go. That was what they were going to do last year until the Finals got cancelled too."

"There's been a lot of brouhaha in the U.S. press about Japan having just been added to the list of countries in the "No Travel Zone."

"What the press doesn't mention is that all of Europe is in the No Travel Zone," said Ridland. "And here we are, and everything is fine. We're tested every time we turn around, but that's fine. And there were lots of people at the Piazza de Siena for the Nations Cup in Rome."

Ridland said he didn't think there would be a problem with holding the Olympics in Japan as almost all the competitors there would have already been vaccinated.