Boyd Martin on Luke 140 won the 4* at Jersey Fresh

ALLENTOWN, N.J.--Boyd Martin of Cochranville, Pa., on Luke 140 won the CCI4*-L at the Jersey Fresh International Three-Day Event on May 9, the final selection trial before naming the team for the Tokyo Olympics. 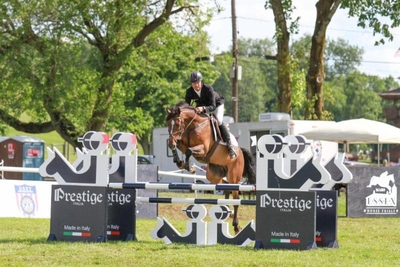 Old file photo of Boyd Martin on Luke 140Boyd and the 10-year-old Holsteiner gelding were clear in both the cross-country on Saturday and show jumping on Sunday–with just a little bit of time–to clinch the title on a final score of 32.4.

“He’s a top jumper." said Martin. "I was thrilled with the way he jumped on a course that was quite tough. He’s worked hard this spring, so he’ll get a few weeks off and we’ll hope to go to a big one at the end of this year.”

Moving up the leaderboard on Sunday to finish in second place was Alyssa Phillips and Oskar, a 12-year-old Holsteiner gelding.

They just came off a win at Kentucky in the 4*S just two weeks ago and this weekend was their first long format 4*.

“He jumped phenomenal, and I couldn’t have asked him to be better," said Phillips. "The Cross-Country course was more technical than it walked. He learned a lot after yesterday and he came out today and jumped really well so I’m looking forward to the future and hopefully doing another 4*-L this fall.”

TAMRA SMITH also finished in the top three in the CCI4*-L on En Vogue, a 16-year-old Hanoverian mare.

Smith was first and second on her two horses today going into Show Jumping but a few rails pushed them down to third and fourth.

However, in the CCI3*-L, a double-clear effort in the final phase gave Smith on Californiia the win.

Smith led that competition all the way through, but with no rails in hand the pressure was on, but California rose to the occasion and they finished the weekend on a 26.7.

Although this was the mare’s first long-format 3*, Smith thinks she is ready to move up.

“This is a stepping-stone for him." said Dutton. "He’s been at this level for a bit of time now and he went well so we’ll try to move up the next level and see if he can be good there,as well.”

Finishing in third in the CCI3*-L was Lillian Heard and Dassett Olympus.

Heard was sixth after Dressage and with a clear cross-country and show jumping was able to finish in the top three.

Heard also won the Closest to Optimum Time Award and the Sportsmanship Award.

“I got him as a 4-year-old and now he’s 8," said Heard. "I’m trying to produce him to the top and he’s been incredible so I’m excited and hopefully he’ll make it there.”