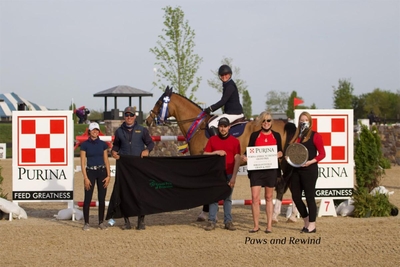 Morgan Ward on Colourful S (Photo by Paws and Rewind)Ward won over Laura Chapot on Gideon, while Ryan was also fourth on Irseline VD Hagenhorst and sixth on Hangover in the Grand Prix.

"I've had Colourful since last August," said Ward. "He's shown at Andrew's before, but this was his first win. He's a 9-year-old. He's a blast to ride. He has a big stride, a lot of scope and a lot of personality."

"We're going back to Andrew's for his next shows and then we'll spend two weeks at Tryon and then two weeks at Saratoga," said Ward. "We show at Andrew's a bunch. It's been good for us pros to have these shows to at least keep showing during Covid. It's a great facility with awesome footing. Andrew runs a great show."

"HANGOVER is a 9-year-old gelding owned by Sascha Abramson," said Ryan. "I picked him out in Europe as a 6-year-old for Sascha. She's curious to see his potential, so she gave him to me to show. He's been showing in 1.40m classes all winter." 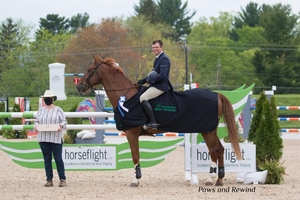 Ryan, who was a member of the WEG gold medal winning team on Eddie Blue, is on the short list with Eddie Blue for this summer's Olympic Games in Tokyo,

Everyone on the short list has to go to Europe  to be judged for selection for the team.

"We're going to Sopol in Poland, and then we know the dates of the next show, but we don't know which show it will be," said Ryan, "With Covid, all the shows in Europe have gotten moved around. But it will be the first week in July.

There will be no spectators allowed in Tokyo, and vaccinations for Covid in Japan are far behind.

Ryan said he didn't know whether all American Olympians would get vaccinated for Covid but that he has already gotten his vaccination.

"Andrew's shows are a great thing in our area," said Ryan. "The shows have great footing and a good variety of jumps. We're very fortunate to have something like this in our backyard. I'm going to show there for the next two weeks. I'm going there instead of Old Salem because the grass field at Old Salem gets wet and then they put you in the little arena."

Ryan said he has 18 horses in his stable and that they're all knocking on the door of competing in grand prix but that just Eddie Blue is actually jumping grand prix now.

Ryan has a number of young, up-and-coming horses that he has in training.