Oliver Townend leads Ky. 3-Day 5* after cross country with eight within a rail

LEXINGTON, Ky.--Cross country Day, Saturday, April 24, at the Kentucky 3-Day Event 5*, brought a number of changes in the leader board snd finished with eight riders from four different countries within a rail of the lead, meaning the show jumping on Sunday will be a nail biter. 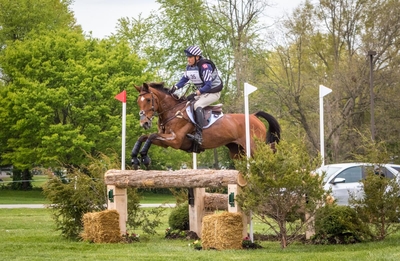 Boyd Martin on On Cue (Photo by RedPayStock)Townend of Great Britain turned in two clear rounds Saturday and sits first overnight with Ballaghmor Class and eighth with Cooley Master Class.

Both horses lost a shoe on course, and persistent rain made the footing slick.

“For me this was the toughest cross-country course for a long, long time at the Five Star level. It’s right up there with the very toughest in the world,” Townend said. “Both horses had a tough enough time out there. I’m still very emotional about how amazing they both are. They’ve both literally given me their heart and soul today.”

By the time Townend left the startbox with Ballaghmor Class, it had been raining heavily for some time.

The horse lost a shoe at fence seven, so Townend said he tried to protect his mount around the slippery turns.

Still, they crossed the finish only two seconds over the optimum time to take the lead on 27.3.

“HE'S AN unbelievable cross-country machine. With a shoe he could have been 10 or 12 seconds inside the time without any sweat,” Townend. “I’d love to be stylish and ride the round I’d like to ride, but it wasn’t meant to be this time. It was rough and tumble and start and stop and just trying to keep him on his feet.” 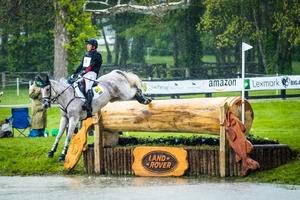 Oliver Townend on Ballaghmore (Photo by RedBayStock)Townend praised Ballaghmor Class’s “tenacity, ability, strength, and complete robustness to do the performance he did” in difficult conditions.

“Cooley Master Class didn’t have a smooth trip at all, but every time I gave him a squeeze he stuck his head down and did what he could,” Townend said. “He lost a back shoe early on and slipped and slid. He wasn’t full of confidence and he wasn’t jumping particularly high, but at the same time he did what good horses do and dug deep and I was very happy with him.”

Townend is now in a position to take a third consecutive win in the CCI5*-L, but with the top eight all within a rail of first place, there is no margin for error in the final phase.

“We’ll celebrate what they’ve given me today and tomorrow’s another day,” Townend said.

He and On Cue, a French mare, made it through the finish flags clear with just 0.8 time penalties to add and head to show jumping hot on Townend’s heels with a score of 27.8.

“She’s a lovely horse. She’s got an awesome gallop and she's a good jumper. This year she’s given me a great feel in the preparation events,” Martin said. “Riding this event for over a decade, I would say this was one of the harder cross-country courses that I have seen designed here. I watched a couple of early horses and it seemed like you had to start fast and stay as quick, nifty, and direct as you can.”

Unfortunately, Martin fell off Long Island T and Tsetserleg TSF, both of which were placed in the top 11 after dressage.

Martin said he is stiff and sore but has been checked out by the doctor and is good to go.

The horses, he reported, are also okay.

“If you want to win, you’ve got to have a crack at it,” Martin said. “I’d rather fail trying to win it than just tippy-toeing around. That’s the sport and there’s no shame in going for it.”

Tim Price of New Zealand and Xavier Faer round out the top three after cross-country.

He posted one of only three double-clear rounds in the CCI5*-L for a two-phase score of 28.2.

Price is also sitting in ninth with Bango, having added only 1.2 time penalties and moving up from 24th.

“I leaned on the advantage of having seen quite a few before Xavier Faer. You could see a lot of horses coming home quite well and recovering well so I thought there was an opportunity to go for a bit more at the beginning of the course to try and get up on the time and then just maintain it home. That’s what I set out to achieve,” Price said.

Price describes Xavier Faer as a good “rhythm horse” who can sometimes lose focus and momentum.

“Today he set out like he was really on his job,” Price said. “It was a good, smooth round. He’s a big striding horse and can do a lot of different things with his scope and strength. I think that’s what gives us the ability to go inside the time.”

Time penalties proved to be the deciding factor in the Five Star.

Tamie Smith and Mai Baum, who were second after dressage, activated a frangible pin on course for 11 penalties in addition to 6.0 time penalties.

Following the conclusion of the Five Star, the Lexington CCI4*-S took to Derek di Grazia’s course, which by now was saturated from the rain.

Out of 40 horses, 15 were eliminated on course and 14 finished without jumping penalties.

No one finished under the optimum time.

Dressage leader Tamie Smith had the final ride of the day with Ruth Bley’s EnVogue.

They jumped clear with 9.6 time penalties and will go to show jumping with a two-phase score of 35.

“It rode very tough and big,” Smith said. “EnVogue was the star. It was a blast and so fun to zip around on her. She just came out like a beast and was so quick on her feet. It was really fun.”

EnVogue was originally entered in the Five Star but Smith moved her to the Four Star for more experience at the level.

“You can never second guess your gut,” Smith said. “The slow way is always the fast way.”