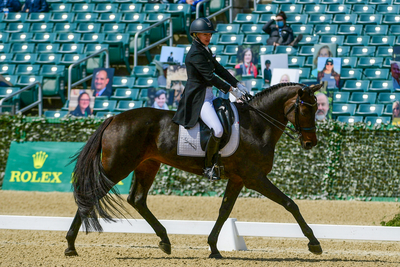 Marilyn Little on RF Scandalous (Photo by MacMillan Photography)That is the best score earned at this event since 2009, when Bettina Hoy and Ringwood Cockatoo scored a 19.2 and Lucinda Fredericks and Headley Brittania earned a 21.5 (scores adjusted to the modern scoring system).

It's a great start for Little and RF Scandalous, the 2018 USEF CCI4* Eventing National Champions.

“It’s great to be back here in Kentucky. It’s a great gauge. The last time she was here she was on a 24.8 [after dressage]. She’s so much more mature and we’ve both learned so much,” Little said of the 16-year-old Oldenburg mare. “Riding a horse like Scandalous here is also a privilege. She’s my horse of a lifetime. I’m acutely aware of that and trying to make sure I’m enjoying every moment with her.”

Like many horses, “Kitty” was “exhilarated by the cold,” requiring Little to adjust her warm-up plan.

“I got a little bit defensive and conservative in the first few movements. All of a sudden I felt her maturity and professionalism come through,” Little said. “I got braver as the test was going and she got some sparkling marks at the end.”

OLIVER TOWNEND of Great Britain on Cooley Master Class are attempting to defend their 2018 and 2019 Kentucky titles this week, and he's off to a good start scoring a 24.1 to sit second after the first day of dressage. 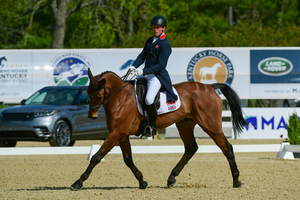 Oliver Townend on Cooley Master Class (Photo by MacMillan Photography)“I think that’s the best test he’s done at Kentucky. He’s on the same score as [2019] but it’s a different test which possibly doesn’t suit him quite as well,” Townend said of the 16-year-old Irish Sport Horse. “He felt very relaxed. He’s probably one that does miss the crowd a little bit because he is a very laid-back character, and it does him no harm to have a bit of atmosphere.

“Of course, we miss the crowd, especially here in America because everyone is obviously so enthusiastic and it’s a very knowledgeable crowd. You can feel that you’ve done a good test without looking at the scoreboard. At the same time it’s still very much Kentucky. You’re still riding down the chute into that arena. In eventing there is no arena in the world like that and that’s why we keep coming back. We’re huge fans of the place.”

Three-time Kentucky champion William Fox-Pitt of Great Britain echoed Townend’s sentiments, and he is making the most of his return to Kentucky for the first time since 2015. 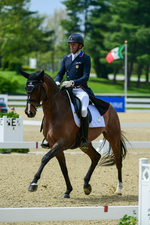 Boyd Martin on Long Island T (Photo by Macmillan Photography)“It’s very nostalgic to be back here," said Fox=Pitt. "Driving into the Park I felt quite emotional and excited. It’s great to feel like that. It’s been two very boring years at home. How lucky are we to have an exciting competition to attack."

Currently placed third with Oratorio on a 27.9, Fox-Pitt is hoping the 12-year-old gelding’s experience at the level will stand him in good stead given their less than ideal preparation due to COVID-19 related event cancellations.

“In Europe we’re a bit behind America and a little bit less prepared,” Fox-Pitt said. “I’m rather hoping with his bit of experience and the fact he’s not a newbie he’ll remember what to do and to aim between those flags. I believe he’s fit and on the aids. Horses don’t forget. They’re amazing animals.”

Boyd Marton of Cochranville, Pa., on Long Island T stood fourth after the first day on 28.8.

Visit the Virtual Experience Webpage to find all the information you need for the 2021 LRK3DE.