LEXINGTON, Ky.--After the first of two days of dressage on Thursday, April 22, three share the lead at the Kentucky 3-Day Event. 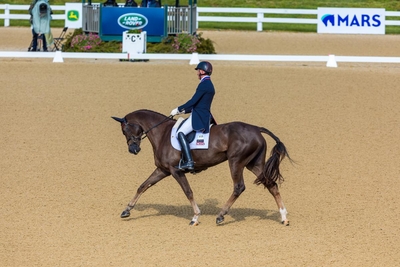 Doug Payne on Starrr Witness (Photo by RedBayStock)Tamie Smith of Marrieta, Calif., on Danito, Doug Payne of Aiken, S.C., on Starr Witness, and Liz Halliday-Sharp of Lexington on  Cooley Moonshine all received a score of 28.1 from judges Helen Brettell of Great Britain and Mark Weissbecker.

Smith was the first to earn the leading score, but Smith said the "quirky" 12-year-old Hanoverian is capable of better marks.

“He was really fresh and kind of naughty in warm-up,” Smith said. “You just have to compromise with him. You’ve got to be firm, but you can’t get after him or be mad at him or he freaks out. I went into that test today not being able to really ride him, so I was disappointed after my ride. He can produce a much better test than he did today. It's what it is. He’s such a cool horse and such a trier, and I really love him.”

SMITH, WHO is based in California and spent the spring season on the East Coast, has a busy week ahead with three entered in the CCI4*-S and one in the CCI5*-L.

“It’s been really good for the horses to see all the different venues," Smith said. "We have only a handful at home, and they’ve been to all those multiple times. I feel like they’ve all come out better and better every show. It’s a huge opportunity to be able to get these four horses in this environment and this atmosphere. It’s priceless really.”

The mare started out as a hunter/jumper, but she shows early promise in eventing, earning a team gold medal with Payne at the 2019 Pan American Games.

“She’s a unique case." said Payne. "She had jumped through 1.25m prior to coming to us. In many aspects it’s not so much to teach her how to jump but more to teach her the nuances that are presented in eventing. She’s wicked smart, quick on her feet, and very athletic. The Pan Ams were a big ask and she just stepped up to it, and she’s continued to do that as we’ve gone forward.”

Starr Witness moved up to Advanced in 2020 and has since completed three CCI4*-S and one CCI4*-L but has yet to finish without time penalties on cross-country at this level.

“We’re just getting to the point we can start being more competitive as far as time goes, but I’ve wanted to give her enough time to set her up for combinations and make sure she truly understood everything that’s being asked of her,” Payne said. “Her attitude is such that she’s going to want to try her best, and lucky for us she’s an athletic freak and was able to accomplish the move up to Advanced]with ease.”

Halliday-Sharp on Cooley Moonshine rounded out a three-way tie for the lead.

Halliday-Sharp has had the ride on this 9-year-old Irish Sport Horse since the gelding was 5.

“He’s a really special horse,” Halliday-Sharp said. “I think it did him good to have an easy year last year. He’s still pretty green and this is his second Four Star. It’s such a great opportunity to get a horse like him into this atmosphere. He can be a bit hot and is keen to get on with the job all the time. Any chance we get to have him in this sort of atmosphere is a wonderful education. He’s a horse I’m trying to take my time with a bit and really get him dialed in. I think he’s very world class and hopefully an exciting one for the future.”

While the Kentucky Horse Park’s Rolex Arena provides plenty of atmosphere on its own, there is a notable difference with the absence of spectators.

“You do your very best anyway when you’re in the ring, so you try not to notice it,” Halliday-Sharp said. “If the stadium was completely packed there would be more for the horses to deal with. For the young horses, it gives them a chance to ease into it and hopefully when they are here competing in a Five Star and it is packed full of people they’ll be more seasoned to it.”

The CCI4*-S scores are close at the top, with the best nine of the first session all scoring under 32.0 penalties.

Competition will resume for this level at 7:45 Friday morning