OCALA, Fla.--The World Equestrian Center in Ocala held international dressage competitors from Thursday, April 15 through Sunday, April 18, the first international competition sanctioned by the FEI to be at this venue. 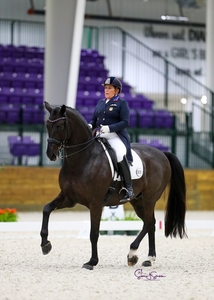 With a bright routine set to the music of the television show “Glee” that received a score of 75.065 percent, Shelly Francis on Danilo won the Freestyle over 13 entries in the class.

Francis and Danilo, a 17-year-old Hanoverian gelding by De Niro 6 out  of Andiamo 28, helped the U.S. Dressage Team take the bronze medal at the 2019 Nations Cup CDIO5* in Aachen, Germany in 2019 and competed at the 2018 FEI World Cup Dressage Final in Paris.

The pair took the 2020 competition year off not only due to COVID, but also because Danilo was recovering from injury.

AFTER A FEW shows this winter, Francis brought the veteran to World Equestrian Center to keep him fit, and it paid off.

“He was much better for the grand prix, and I was really happy with him tonight,” she said after the Freestyle. “He’s 17, so he’s older and it takes a little longer. He’s starting to feel like his old self. He feels happy and like he wants to do it, so I’ll keep going. Next year if he feels spunky like this, maybe I’ll make an attempt for World Cup again. I won’t push him hard, and he’ll let me know.”

While Francis has used this freestyle for many years, she did make adjustments such as new entry music and choreography changes.

“I added two double pirouettes to make it tough,” she said. “He’s very handy. The music helps me and keeps me in rhythm too. He really likes the freestyles, and I have fun with them. I’ve had this music for a while, and I’ve changed it a lot over the years. I kept most of the choreography the same. It’s kind of unique, and I like that.”

While Francis brought students to the national shows this winter, this is her first time competing at World Equestrian Center.

“It’s just lovely here,” she said. “This is the best facility in the world.”

“As far as infrastructure goes, this is the best venue in the world that I have ever competed at,” she said. “I absolutely mean it. I was a little worried because my horse has never competed indoors with me before, but there are indoors and there are indoors. This is not an indoor! It reminds me a little of the Tempelhof in Berlin, where they held a big indoor show one year. It had huge hangars. It’s this feeling of space; you feel like you can get on your horse and just fly. The lighting, the climate control, the footing, it’s just fantastic.”

Haddad Staller rode Frankie, a 12-year-old Hanoverian mare by Florencio 2 out of A Jungle Prince that she owns and bred herself to a score of 73.530 percent.

Through a pipeline training program in her stable, Haddad Staller had young riders learning to become professionals that worked with Frankie throughout the horse’s career, leading to many wins including the USEF Prix St. Georges Developing Championship in 2017.

Haddad Staller took over the ride, and in the last year the mare has become a top competitor.

“I’m very excited about the future with this horse,” said Haddad Staller. “It’s her first year at grand prix and this was her very first freestyle tonight. She’s gone from understudy to leading lady in the playbook of my life. She is the number one horse in my stable, and she knows it now.

“I wasn’t sure if she’d be able to rise to the occasion because this freestyle was originally for a much bigger-strided horse, but when she heard the music and I pushed her a little bit, she covered ground and floated,” she said of the freestyle that included a compilation of music from the performer Pink. “It felt like a magical moment for the two of us.”

Similarly, third-place finishers Mikala Munter on Salsa Hit, a 12-year-old Oldenburg gelding by Samba Hit III out of Riverman-ISF, were competing in their second freestyle ever and received a score of 71.945 percent.

“I didn’t even try it national first,” she said. “He’s a very green grand prix horse, and he had his first CDI grand prix this winter. I was trying the Intermediate A and 2, but I wanted to try and see if we could step up to the grand prix in the CDI. He was like, ‘Yep, okay!’ We did a couple of Specials."

“I wanted to see if we could put the freestyle together that I’ve had in my head for a while,” she said. “I put it on paper, and I knew it had to be Frank Sinatra because that horse is Frank Sinatra, all the way through. I knew it from the first day I rode him. At the same time, it’s a tribute to my dad who is a huge Frank Sinatra fan. I’m so glad that he got to watch it.”

Munter described Salsa Hit as “spicy Salsa!” and while they have taken their time to get to the grand prix level, Munter feels it is where the horse wants to be.

With strong scores in their first two freestyles and a high degree of difficulty in the test, Munter thinks it will be “very, very good” to come in the future.

KELLOCK of Canada on Sebastien won in the FEI Grand Prix Special CDI3* on Sunday, while Kohmann, riding for the last time for Germany as he recently received American citizenship, on Five Star swept the Small Tour with a third win in the FEI Intermediate 1 Freestyle CDI3* on Sunday. 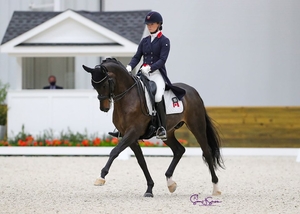 Lindsay Kellock on Sebastien (Photo by Susan Stickle)It was the second win of the week for Kellock and Sebastien, who also won Friday’s Grand Prix CDI3*.

Kellock scored 72.021 percent in the Special, which is longer, more technical, and offers more challenging movements.

“The pirouettes to the one-tempis down centerline, that’s a difficult move,” Kellock said. “It’s just overall longer, so it’s harder for them to keep their power throughout. For this horse, it’s a good test because his strengths are his passage and his extended trot, and there is a lot of that in this test. He likes this test.”

Kellock felt that Sebastien improved from Friday’s grand prix and said, “Sebastien again brought his ‘a’ game and tried his heart out for me. I just could not be happier. We had some great passage today and good pirouettes. My overall feeling was that I had more power in this test than I did in the grand prix. That showed in the score.”

Sebastien is a “very, very confident horse,” said Kellock. “He loves attention. He doesn’t always show it, but he always wants attention. My manager Meghan Donovan, is his number one caregiver, and he loves her to death. She is constantly giving him attention in every way. He’s a people horse for sure.”

Second place in the Special went to Brittany Fraser-Beaulieu (also of Canada, on All In, who scored 71.936 percent.

Along with being the top amateur in the class, Jessica Howington placed third overall with Cavalia, with a score of 71.447 percent.

Kohmann on Five Star scored 75.350 percent in the FEI Intermediate 1 Freestyle CDI3*, and that was their 14th win together, 11 of which have come in the 2021 winter season.

Sunday’s freestyle score is not the highest they have received because, as Kohmann said, “I tried to do some bold things that didn’t quite work out.”

This final win together at the show was bittersweet for Kohmann, who teared up while listening to his native country’s anthem for the final time while riding for Germany.

Kohmann, who is 32 and originally from Pansdorf, Germany, recently received citizenship for the United States and will ride under the USA flag in future competitions.

This class also marked the end of the Small Tour for Five Star. The plan is to move into national Intermediate-2 classes and then grand prix tests.

“We want to do it the right way and don’t want to rush into it,” said Kohmann. “At home I can already do it, but as we all know, doing it at home and doing it at the show is a big difference.”

Second place in the freestyle went to Anna Marek riding Felissirana, with a score of 74.975 peercent.

Sarah Lockman on Balia was third on73.983 percent.

With his freestyle victory, Kohmann also won the Small Tour championship and reserve champions were Anna Marek and Felissirana.

The champion of the Amateur Tour of the CDI was Taryn Hartnett riding Edward, while Cynthia Davila and Fayvel were reserve champions.

Jillian Sheppard and Bahai took the championship in the Young Rider Tour, and Brooke Mancusi rode Grand Amour to the reserve championship.

Nicole Scarpino and Lambada 224 were the Under 25 Tour champions, and Kerrigan Gluch with Vaquero HGF won the reserve championship.