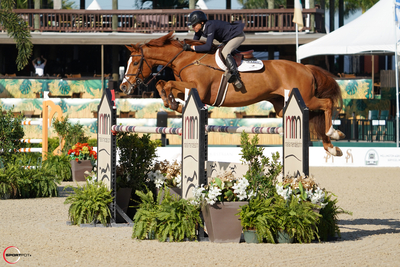 Laura Chapot on Calafornia winning a 1.40m class (Photo by Sportfot)Frank Chapot won the Overall Trainer title s few times before he died in 2016, and Mary Chapot has won it a few times since, but they have seldom won the Owner title.

"The Owner title is very hard to win," said Mary. "You have to have a lot of horses showing to win that. For instance, the girl who was second to us this year had 30 horses.

Laura showed 14 horses throughout the circuit, dominating the 1.40m section with the top four placings and also placing three in the top 10 in the 1.35m section.

"We showed Chadon Blue in a few grand prix, but we didn't show in any of the 4* or 5* grand prix," said Mary. "The competition was just crazy with all the Europeans over here trying to prove themselves for the Olympics. Plus, FEI classes are very expensive to go in, so if you're not winning it's very hard to make expenses."

"Each of the horses has its own little bit, so I would hesitate to name a favorite, but I guess for s personal favorite I would have to say Umberto,,who was 1.35m champion at 20 years old," said Mary.

"We were going to go to Devon, and we're very disappointed that it's been cancelled," said Mary. "We'll do some shows at Andrew Philbrick's Princeton series. They're very nice shows. And we'll do some Saugerties, but they've bumped up some classes to FEI, so we'll have to look at expenses there. Then we'll do Lake Placid. That's always our favorite, and it looks like it's going to go on."

Ken Berkley of Flemington, N.J., who is listed as the trainer for Scott Stewart's mounts, was Overall Hunter Trainer, but while Stewart won a big share of championships, he was beaten out this year for the Overall Hunter Rider title by Victoria Colvin.