Doug Payne dominates the 4* at The Fork

MILL SPRING, N.C.--Doug Payne of Aiken, S.C., dominated the CCI4*-S Division at The Fork, winning on Vandiver and also placing fifth and eighth on Quantum Leap and Star Witness. 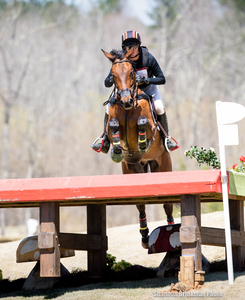 Doug Payne on Vandiver (Photo by Shannon Brinkman)But Payne didn't just win in Eventing as In between rides and coaching across all divisions in Eventing, Payne was also winning in the Jumper rings as part of Tryon Welcome 2 competition, where he went two-for-two aboard Quintessence.

The cross-country and show jumping phases of The Fork for the upper levels were competed on Sunday over Captain Mark Phillips' course on the White Oak cross-country course and Michel Vaillancourt of Canada designing the show jumping courses in Tryon Stadium.

Payne on Vandiver was the only one to add no time faults to his score after cross-country to win the CCI 4*-S Division on a score of 25.7.

Payne was also fifth place on Quantum Leap on a score of 34.6, while on Starr Witness he  scored 37.9 to place eighth.

Holding steady all weekend at second place, Boyd Martin of  Cochranville, Pa., finished on a score of 28.1 for reserve with Tsetserleg, and Tamie Smith of Murrieta, Calif., was third on Mai Baum, adding 7.2 to her score to finish with a 28.4 .i

PAYNE, whose three CCI 4*-S mounts are all qualified for Tokyo, said that his goal with each horse was to “let them flow and see what we could get done,” which resulted in top 10 finishes. 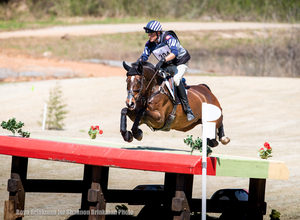 Boyd Martin on Long Island T won an Advanced division (Photo by Shannon Brinkman )“Quinn [Vandiver] is the old man of the group, but he’s just getting better and better each year," said Payne. "He’s honestly easy and efficient. It’s not that I wasn’t trying to go fast, but he’s just a quick horse. He covers the ground and is easy on himself. With Quantum Leap, who was pretty close to the time, every once in a while he needs to be set up a little more. He’s a five-star horse in the making, without a doubt.”

Starr Witness, Payne’s Pan-American Games mount, is aiming at a 4*-L run in Jersey unlike the others, who are aimed at the Land Rover Kentucky Three-Day Event.

“Clearly, she’s a classy horse as well," said Payne. "She just doesn’t have the base fitness that the other two do at the moment. Fitness is a little less urgent with her right now. We’ll see what we can do the rest of the season!”

LUCIENNE ELMS of Great Britain riding Tremanton maintained her lead in the CCI 3*-S Division, finishing on a score of 28.9 for the win.

Allison Springer on Crystal Crescent Moon was reserve on a score of 29.3 after her double-clear cross-country run, while  Smith riding Solaguayre California kept her 30.8 score to place third.

“Genuinely, my plan was actually just to let her find a rhythm and then not hassle her out a bit, but I set off riding forward and actually, the way they built it, the course rewarded quite forward riding, I guess, and the combinations were built to sort of just keep moving," said Elms. "So she felt confident, and balanced, and the ground was great. So I just kept the same rhythm and when I got to the furthest part of the course, I saw that I was on a pretty good time at that point. Every time she landed, I kept her just moving forward; she’s got a lot of blood in her with a natural gallop. I rode carefully through the second water. That was a little bit big for her. And then she had loads of gallop left."

Maya Black on Double Diamond C won the CCI 2*-S Division, finishing on a score of 28.8.

BOYD MARTIN and Will Faudree won in the Advanced Divisions.

Martin retained his one-two placing in the Advanced – Test B Division, with Long Island T taking over the lead after cross-country phase to finish on a score of 41.8  while Luke 140 finished in reserve on a score of 42.7.

Will Faudree of Southern Pines, N.C., on Mama’s Magic Way won the Advanced – Test A Division despite pulling two rails in Show Jumping and adding 16.4 time penalties after Cross-Country, finishing on a 52.2.