WELLINGTON, Fla.--Adam Prudent on Baloutinue raced to victory in the $214,000 Grand Prix CSI4* on Saturday, April 3 at the Winter Equestrian Festival. 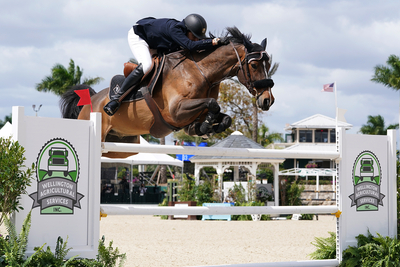 Adam Prudent on Baloutinue (Photo by Sportfot)A starting field of 42 competed over the 1.60m track designed by Olaf Petersen Jr. of Germany with eight qualifying for the jump-off.

First to return in the jump-off, Ioli Mytilineou of Greece on Levis De Muze set the time to beat with a clean round in 40.20 seconds.

Times just got faster from there as Canada’s Jim Ifko rode next on Un Diamant Des Forets to a new leading time in 36.54 seconds which held up for second.

The next rider got the job done even faster as Prudent produced a clear round in a blazing 35.28 seconds.

Riding sixth spot in the jump-off field of eight, Kent Farrington on Gazelle was clean in 37.37 seconds to move into third.

FOR PRUDENT, the win is a sweet victory with a horse he has had for almost four years.

He and his team at Plain Bay Farm, mother Katie and father Henri, have taken the development of the gelding slowly, only moving him up to the four and five-star level this season.

“The horse is very careful,” Prudent said. “I haven’t really had a chance to go fast yet since this is only my third grand prix jump-off with him. I pushed it to the limit this time and really asked him to perform the best he could. I knew I had a lot of fast people behind me so wanted to really lay it down and take every risk I could, and it worked out quite well.”

“Monty is a very aggressive stallion when he’s in the ring,” said Ifko. “He’s a competitor for sure! In the jump-off we maybe had a bit of an advantage in the two lines that were both long nine strides to verticals. He has the ability to run down to a vertical and still leave it up, so I felt confident galloping quickly down both of those lines. Luckily enough, it worked in our favor.”

“I went later in the jump off," said Farrington. "These two guys went early and went aggressive to try to win, which I love. I think that is great sport. They both had incredible rounds today, and the jump-off was very open which as Jim said, suited a very quick-moving horse which both of their horses are.

“I think this year we saw more European riders than in the past,” he said. “I think at least five of the top 10 riders in the world are here, which raises everybody’s level. I don’t think there is an easy class to win during the 2021 circuit, so anyone that has won a class here has earned it. It has been a high caliber of horses and great riding, and today was no exception. My mare is 15 years old, and I’ve been kind of bringing her back up slowly. She was a little rusty here when she started so I’m glad she’s back in form, and she is shortlisted for the Olympics. We’ll see where that goes, but I like to feel like she’s on the upswing again so that’s a good day for us. I thought Adam had an incredible win. I’ve known him and his family a long time. They are great horse people, so hats off to them today.”

Looking ahead, Prudent plans to give his string of horses at least a month off at their farm in Virginia after a busy winter circuit of competitions.

For Ifko, the plan is to return to Canada for a much-deserved break as well.

With a similar plan to his fellow competitors, Farrington will stay in Wellington a little while longer and give his horses some time off in the Sunshine state.

Before the class, Adrienne Sternlicht was presented with the Overall Martha Jolicoeur Leading Lady Rider Award for her wins during the whole season of WEF.

Germany's Daniel Deusser's owner, Stephex Stables, was presented with The Harrison Cup Perpetual Trophy, which is awarded to the owner whose horses won the most jumper money in all of the open jumper classes held throughout the circuit.

The Simba Run Perpetual Trophy was also presented to Stephex Stables as the owner of Scuderia 1918 Tobago Z, the open jumper who earned the most prize money in classes held at 1.45m or more during the 2021 WEF.
616_9152