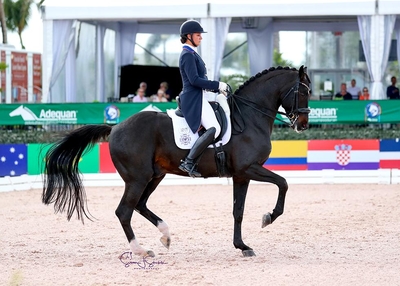 Adrienne Lyle on Salvino (Photo by Susan Stickle)This was Salvino's first competition in over a year.

“It felt amazing,” said Lyle. “He just never ceases to amaze me with his heart; that horse has a bigger heart than any animal on this planet, I think. He’s just proven time and time again that he’ll be there when I need him to be there, if we listen to him and don’t overdo it. We waited to come out last year until later in the season and it worked, so we decided to wait again this year, and so far it’s off to a good start. Hopefully we can put in a few more performances like that leading up to the summer.”

Lyle put in an outstanding performance, ending the ride with a personal best score of 80.065 percent.

“He felt really fit and fresh,” said Lyle, “He was even squealing a little going around the outside of the ring like he was really fired up. I like him to be in that spot where he’s really excited to go in there.”

“I ACTUALLY started crying after the ride, which I hardly ever do," said Lyle. "He didn’t put a foot out of place, and he’s so amazing. I could tell he was excited and fresh. We haven’t been in there in over a year, and when he went down centerline, he focused and knew it was time to put everything aside. He really knows how to be there for you, and not many horses are like that. You don’t get to sit on many of those in a lifetime.”

Lyle has already had a successful season with her other grand prix mount, Harmony’s Duval, and now plans to campaign Salvino for a chance to represent the USA at the Tokyo Olympics this summer.

“I am really lucky because I have two grand prix horses, so I myself don’t feel rusty even with his time away," said Lyle. "Debbie and Betsy and I are all on the same page in the sense that he’s proven that less is more, and you have to stick to your gut. It’s hard sometimes when you’re sitting at home, you’re still six months away from the show, and you want to be working on things, but you have to tell yourself no, just keep him fit and happy and he’ll be there when you go to the ring. So far it’s proven true.”

Once AGDF concludes, the pair, now based year-round in Wellington, will head to Tryon International Equestrian Center in North Carolina to compete in the newly upgraded CDI4*.

“We’re planning on going to Tryon,” she said, “and then if that goes well, hopefully we’ll be named to the shortlist for the selection trials. For us, because those are in Wellington, not much will change for him and that’s nice. It will be a good test because it will be similar heat to Tokyo. If we can have that advantage over some of the other European countries, I think we’re smart to utilize that.”

Second place in the FEI Grand Prix for Special CDI4* went to Olivia LaGoy-Weltz on Rassing’s Lonoir, who also earned a personal best score with 76.152 percent.

The FEI Grand Prix for Special CDI3* was won by Susan Dutta  on Figeac DC with a 70.630 percent.

In second was Jessica Howington on Cavalia, on a score of 68.522 percent, and third was Alice Tarjan with 67.457 percent.