WELLINGTON, Fl.--Brian Moggre, just a couple of years off winning the Maclay Championship as a junior, was double-clear on MTM Vivre Le Reve to win the $50,000 WEF Challenge Cup Round 12 on Thursday, April 1, at the Winter Equestrian Festival. 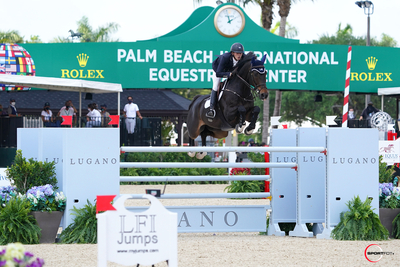 Brian Moggre on MTM Vivre Le Reve (Photo by Sportfot)In the final grand prix qualifier of the winter circuit, 63 entries challenged the first-round course set by Olaf Petersen Jr. of Germany with just eight qualifying for the jump-off, but the seventh-ranked rider in the world, Kent Farrington, elected to save his horse for the weekend leaving a total of seven to compete over a shortened track.

First to return for the jump-off, Nayel Nassar of Egypt paved the way for the rest as he rode Lucifer V to a clear round in 40.32 seconds.

Fresh off his victory in the $500,000 Rolex Grand Prix CSI5*, Germany’s Daniel Deusser returned fifth of seven to also go clean but just off the leading time , finishing in 40.56 seconds.

SECOND FROM last to go, Moggre knew the time he had to beat.

“In the jump-off, I did one less stride in the first line and the last line,” said Moggre. “I walked eight strides and eight strides, but he’s got a huge stride. The horses carry across this footing in the International Arena very nicely. They travel the ground well, so I did one less stride, and he got up those sevens just as if he was doing the eight. It worked out for us.”

The risky plan paid off as Moggre and his longtime partner “Erkel” added their own double-clear to the leaderboard with the quickest time of the day, crossing the timers in 40.04 seconds.

“Erkel is amazing,” said Moggre. “With seven jumping off, we could put a little pressure on and see what came of it. I asked him to step up to the plate, he did, and I still feel as though I have a good horse for the grand prix on Saturday.

“He’s my rock after all these years,” he said. “All of my firsts, like my first FEI class, first grand prix, first three-star, four-star, and five-star, have been his first time also, so he’s a horse that I have a really special relationship with. It’s really nice to see that we’ve still got it.”

“I know him like the back of my hand,” he said. “I trust him, and I know what risks I can take and which ones I should maybe avoid. I think the best part of our relationship is we really know the ins and outs of each other. You can say we know so much about a horse, but I think they really know you too as a rider. That’s a great thing for him and I. He’s incredible.”

Moggre will be back in the International Arena on Saturday with his partner to wrap up their 2021 WEF in the $214,000 Grand Prix CSI4*.