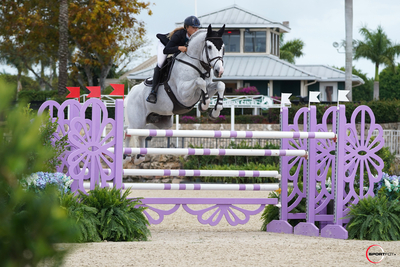 Kristen Vanderveen on Bull Runs Faustino De Till (Photo by Sportfot)In the 1.45m, 50 competed over the two-phase course set by Olaf Petersen Jr. of Germany, in a class that is a qualifier for Friday’s $73,000. 1.50m Classic Series Final.

Just ninth in the starting order, Vanderveen was clean in 21.92 seconds, fast enough to hold the lead until the end.

“My plan was actually not to try and win,” she said. “He felt like winning today. He jumped the first half really nice, and he likes to go fast so I figured I would let him have it. I definitely changed my plan midway through. It went from a nice schooling round to a ‘let’s have some fun.’”

VANDERVEEN and her mount, known as “Frosty” in the barn, will jump the $73,000, 1.50m Classic Series Final, one they’re both looking forward to.

“He’s been my long-time partner for now for five years,” she said. “He’s been really unique for me as he won a CSI5*, he’s won a few CSI4* classes, but he’s also won so many speed classes. Now, I mostly use him as a speed horse. This is his specialty.”

Vanderveen will also campaign Bull Run’s Risen during WEF 12, jumping in Thursday’s $50,000 WEF Challenge Cup Round 12 in hopes of qualifying for the grand prix.

While the 12-week circuit is coming to a close, the 31-year-old rider feels she’s in top form to keep on rolling into a busy spring of competitions in Wellington, Florida.

“I broke up my 2021 WEF really nicely so I still feel very fresh,” she said. “I try to plan our winter circuit smart, so no one gets too drained. We’re actually excited for the CSI3* spring shows that were added, and we’re ready to keep rocking.”