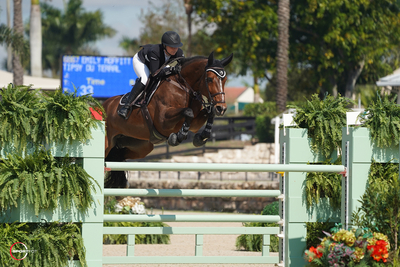 Emily Moffitt on Tipsy du Terral  (Photo by Sportfot)Over a course designed by Steve Stephens and Nick Granat, 56 entries went for speed in a one-round format in the Challenge Cup.

There were 26 clear rounds, but the fastest was Emily , who finished in 63.82 seconds.

Moffitt went 37th in the original order and beat the then-winning time of 64.34 seconds set by Darragh Kennyof Ireland on Vinci de Beaufour, who finished second.

“I watched Darragh go into the lead, and I said to my friend, ‘Wow that was spectacular. That’s how we gotta do it!’” said Moffitt. “And then I didn’t really think about it again. I had my plan, and you know my trainer Ben Maher always says we have our plan and if we win, we win, great, and if not, we gave it a good shot, so it paid off today.”

Third place went to Adam Prudent on Baloutinue, who was two seconds behind in 66.31 seconds.

MOFFITT has been riding Tipsy du Terral for more than three years.

“I have always had a very great connection with her,” said Moffitt. “I love when they’re strong and they pull, but she still allows you to really ride her so it’s the best of both for me. We have always since the beginning had a great partnership, and she tries her heart out for me every single time she goes in the ring.

“Another great quality that Tipsy has is she’s not one that you have to pull back together or have a training round after going fast,” said Moffitt. “She actually gains more confidence from it, which is great to be able to go in and try to win every single class.”

He was the fastest of six in the jump-off, narrowly edging out Daniel Deusserof Germany on Bingo Ste. Hermelle, who finished in 36.348 seconds, and third was Lauren Hough on Harley D, clean in 36.824 seconds. 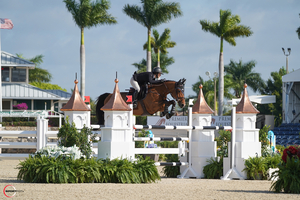 Adrienne Sternicht on Lafayette Van Overis (Photo by Sportfot)Sternlicht was clear effort in 58.54 seconds to win over a class of 65 entries.

The pair has only been together for five months, but the partnership is progressing well.

“Lafyette is a very competitive horse,” said Sternlicht. “Bertram Allen won a ton on him before, so I think immediately when you have a horse like that, you feel a bit of pressure for it to go well right off the bat. It has been a little bit up and down; he’s quite a different ride. Bertram has quite a different riding style than I do but I have to give credit to him; he has helped me within the past week, and everything seemed very easy today, so I was happy.”

Jessica Mendoza of Great Britain on Dublin stopped the clock just behind Sternlicht, finshing in 58.75 seconds, and Megan McDermott on Entano was third in 58.78 seconds.

Sternlicht’s plan heading into the ring was just to jump a smooth round and rely on her horse’s natural speed to do the rest.

“By nature, myself and my coach McLain Ward are real planners,” said Sternlicht. “Bertram told me the less I counted strides, the better. It’s definitely an adjustment but everything came up really nicely today, and we’re all scratching our heads because it seemed very easy.”