Ireland's Bartram Allen and Daniel Coyle place one two in the $401,000 5* Grand Prix at WEF

WELLINGTON, Fla.--Ireland came out on top in the $401,000 Grand Prix CSI5* on Saturday, Feb. 27, with Ireland's Bertram Allen on Pacino Amiro placing first over Daniel Coyle on Legacy. 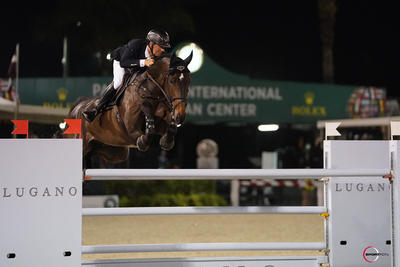 Bertram Allen on Pacino Amiro (Photo by Sportfot)Over a challenging course set by Anthony D’Ambrosio and Andy Christiansen of Ecuador that featured the open water, a triple combination and two double combinations, five riders were clean out of 40 starting entries.

The first to return for the jump-off was another Irishman, Lorcan Gallagher on VDL Cartello, who had one rail down to finish fifth in 38.47 seconds.

Immediately following, Allen and Pacino Amiro sped through the course in 35.32 seconds, a time that couldn’t be caught by the remaining three competitors.

“There was no real standard set before I went in because Lorcan obviously had a fence down,” said Allen. “There were only three coming after me, but they were obviously three very, very good ones on fast horses. I know my guy is fast, and with only five in it, the worst case I was fifth. I was going to give it a good shot, and thankfully it came off.”

CANADIAN Mario Deslauriers on Bardolina 2 was clean but not fast enough to finish third in 37.62.

“When I saw Bertram go, I was walking next in the ring and I said, ‘That’s going to be hard to catch for me,’” said Deslauriers. “My horse has a big stride, but she is not the fastest horse, and she can sometimes be a little finicky to ride so I thought I went as fast as I could. I was trying to leave all the jumps up and see where I end up, but I was very pleased. She jumped great tonight.”

In a class stacked with Irishmen, it was Daniel Coyle on Legacy who came closest to Allen’s leading time, finishing clean in 37.11 seconds to finish second.

“Anything Bertram does in the jump-off is usually hard to follow or catch,” said Coyle. “I knew before I went in that was going to be a challenge so I just stuck to my own plan and if it was good enough, great, and if not, there will be lots more. It’s Legacy’s first class under the lights this year, and I always have huge, huge expectations of her.”

Aiming for his third five-star class win of the week, Daniel Deusser of Germany was the final competitor in the jump-off.

Riding Killer Queen VDM, who won the four-star grand prix in WEF 4, Deusser made a strong effort, but had a rail down in 35.62 seconds to finish fourth.

Allen was riding Pacino Amiro in only thei gelding's second five-star grand prix under the lights.

“The last grand prix I suppose I was stepping into the unknown a little bit with him,” said Allen. “He had never jumped a five star or been under the lights, and he handled it very well. Tonight, I was a bit more confident that I knew that he could do it, so I was just hoping that he was going to be on form. He was even better again tonight.”

Allen has been riding Pacino Amiro since he was 7 years old and developed him as a young horse.

“He’s a little bit of a special character, and I know him very, very well,” he said. “Since week one he’s gotten better and better, and he is a lovely horse who wants to try his best all the time and learn.”

With many competitions cancelled in Europe this winter, Allen was thankful to be able to compete in Wellington once again.

“It’s brilliant,” he said. “I was here for a bit of the season in 2020, and that got cut short, and then it was very start and stop and a lot of the time with no shows. To be here consistently jumping at a very high level, we are all very lucky and make the most of it.”