WELLINGTON, Fla.--Steffen Peters and Sabine Schut-Kery won at the Dressage Festival while Germany's Daniel Deusser won for the third time at WEF, this time in the Challenge Cup, on Feb. 25. 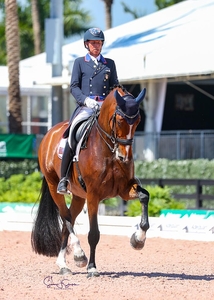 “After the test he felt like he had another two tests in there,” said Peters. “This is actually the right weather for him, where I can ride him a little bit and he settles down a bit more. That warm weather is what we are going to face in Tokyo, maybe even quite a bit hotter than this, and Mopsie seems to be ready for it. He’s been very consistently in the 76, 77 percentile, and that’s super exciting that I can ask for a bit more. Today he had a very clean test with a good, relaxed walk, so I’m extremely happy.”

Peters and the gelding have won every class they have competed in this season.

“I think it’s always fun to support the organizers in the five-star freestyle,” he said. “If we do well then, it’s nice to give back to our people, and help to pay the bills a little! We’re really looking forward to it. The freestyle is one of my favorite tests to ride, though sometimes it’s not Mopsie’s, but the night atmosphere is still something he needs to get used to.”

The pair’s final Festival competition will be next week at the Palm Beach Dressage Derby, and then Peters’ plans are tentative based on the status of the global pandemic and the state of the world.

“I’VE ALWAYS believed that our federation makes very good decisions for us," said Peters. "Since Europe is still on lockdown at the moment, it doesn’t really make sense to go there. I will just wait for the input from the US Federation, and I know they will make the right decision. I’m looking forward to doing the Palm Beach Derby here next week, and Mopsie will get a nice break for March, and then in April we will start to pick it up again.”

Katherine Bateson Chandler on Alcazar was second on a score of 69.913 percent.

“I was really happy with my horse today,” said Bateson Chandler. “He does struggle with tension at times, and I’d prefer him to be a little bit more relaxed, but I need some of that positive tension, so there’s always a fine line. I was happy with how it worked out in there.”

Alcazar is coming into his sixteenth year and getting more comfortable with the competition.

“This whole season he’s been as honest as he’s ever been in his career,” she said. “When that happens you really realize that it takes years for these horses to mature to this level. I still had one mistake in the one tempis, which was really frustrating because I’ve had those the last three tests, but overall his general rideability was good. I’m super happy with his attitude. It’s not so easy in this weather because it’s hot and he’s a big black horse, but he’s been down this centerline a lot so I think he’ll be very excited to move on, and hopefully we’ll get a season elsewhere. In the meantime, this is a fantastic show and we’re lucky to be able to have it.”

Third was Guenter Seidel on Equirelle with a 69.304 percent.

“Today we had a lot of mistakes, but they were more my mistakes than hers," said Seidel. "This is her fourth show in a row, and it’s getting a little better, but we are just chipping away at it and hopefully we will work our way up with the score.”

“She hasn’t shown under the lights yet, so we’ll see," said Seidel. "She’s already such a hot horse, so I don’t know if it will be a plus for me! It’s the show atmosphere itself, so I think you just have to do it and keep going. It doesn’t matter if it’s large or small; it’s the same for the horse when they are learning.”

SCHUT-KERY on Sanceo re-entered competition in November after a summer break, earning scores of over 74 percent in the CDIs in California before arriving in Florida in January.

“Sanceo was really great,” said Schut-Kery. “Any errors made today were rider errors, and I think I lost him in the zigzag. However, he felt great in the first part of the test and then recovered quite well from those rider errors. I have no complaints, and I feel like we are getting to the point where we can see where we want to push more, and where we need to finesse things.”

“Having this five star is amazing," she said. "When I look around, a lot of the places are closed down all over the world. We are so fortunate. I think everybody agrees that we would follow any protocol, just to be able to keep going. Speaking for myself, I have a horse that’s 15 years old. It’s not like he’s 8 or 10, and one year doesn’t matter. For me, it’s very special to be here and be invited to this competition, to the five star, and that there is that caliber of show. Thank you to everyone that puts this on and supports it.”

The 52-year-old is currently second on the USA Dressage Shortlist behind Peters and hopes to remain there through the spring and summer.

“I’m planning to do one more show in March,” she said, “though I haven’t decided yet which one. After that we will hopefully go home for a little break and make it onto the updated short list. It would be great to go to Europe, but obviously nobody knows right now.”

Second place in the FEI Grand Prix for Special CDI5 went to another current short list pair, Adrienne Lyle on Harmony’s Duval with a 72.587 percent.

“We were very honored to get an invitation to the five star and want to thank all of the sponsors for putting on this amazing show,” Lyle said. “I chose the Grand Prix Special with Duval because that is our main focus with him right now. My goal is to try to qualify for the short list, so we are focusing on the Special. He felt really good in the warmup, and I’m really happy with the work we are getting out of him. He’s kind of a funny horse; he went in there and his brain went mach 90 and we lost each other a little bit for the first half of the test, but that can happen and I can’t complain. The work is going well, and he is feeling good at home. We are going to alter the warmup a bit for the special to see if we can keep his nerves under control, and we’ll see how it goes.”

Third was Charlotte Jorst on Kastel’s Nintendo with 72.326 percent, who is also sitting on the short list behind Schut-Kery and Lyle.

“Nintendo was just incredible as usual,” said Jorst. “He just comes out every single day, and he must be the most honest horse I the universe. He always tries his best, and he did again today. I’ve been working on getting him ‘through.’ I’m so grateful to have a horse to ride in a five star. That has always been such a huge dream, and now it’s coming to fruition. I got a little teary-eyed in the barn because it’s so emotional for me to be able to continue to ride. I learned to ride the grand prix with this horse, and now he’s allowing me to continue to ride. I’m also trying to get on the short list. That’s my dream and my goal, so if he allows me to get there, it would be amazing.”

DEUSSER continued his winning ways, this time aboard Scuderia 1918 Tobago Z, taking the top spot in the $73,000 WEF Challenge Cup Round 7. 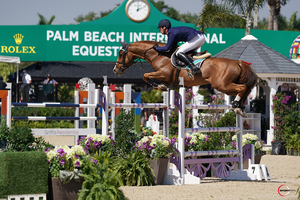 Deusser and ‘Tobi,’ who arrived in Wellington less than a week ago, stopped the clock in 39.15 seconds to win by nearly one second.

“We have been a team for many, many years,” said Deusser. “There is a reason why he’s been my number one horse. I know him well, and he knows exactly what to do in the ring. On Sunday, I jumped a couple of jumps because he hasn’t shown in two months and I thought he might be a little rusty and stiff. I started yesterday in the 1.40m competition just to see how he was in the ring but even yesterday, straight away, it was a different feeling. He knows that it counts in the ring. That’s why I entered him today, and you couldn’t really see that he’d had a two-month break. In the end, he shows he’s a bit cleverer than most of the other horses I ride.”

Brazil’s Eduardo Menezes was second place on H5 Elvaro, having set the pace for the class as the first to return for the second round, jumping double clear in 40.12 seconds.

Deusser, who sits third in the world rankings, continues to produce clear rounds each week at WEF.

The latest member of his string of horses to join him in Wellington is one he’s found a great deal of success with, including a third-place finish with the German team at Nations Cup Final in Barcelona and a fourth-place finish at the World Cup Final in 2019.

“If you watch me a little bit in the warmup, he [Scuderia 1918 Tobago Z] looks like he’s really quiet,” said Deusser. “He looks like he doesn’t have much blood and doesn’t want to run that much in the ring, but I think that’s just one of his strengths. He saves his energy for the exact moment he needs it, and I think we’ve figured that out over the last couple of years. It counts the 60 seconds in the ring, not the 10 minutes in the warmup.”

Thursday’s victory ensures Deusser will have a spot to jump on Saturday night in the $401,000 Grand Prix CSI5* and while the pair looked to be in top form during their return to international competition, the 40-year-old rider has elected to give his top horse a bit of extra rest and let a developing talent give it another shot.

“We always want to win,” he said. “We go into the ring to jump clear rounds and to win at the end, but sometimes you have to prepare the horses a little bit, which means you have to pick your classes. To go fast every time is almost impossible with the horses. My plan this week was to jump Tobago yesterday and today, and I’ll ride Killer Queen VDM in the grand prix. She was a little bit nervous under the lights two weeks ago so I thought I would jump her in a few smaller classes just to help relax her a little bit and then she’ll jump on Saturday night.”