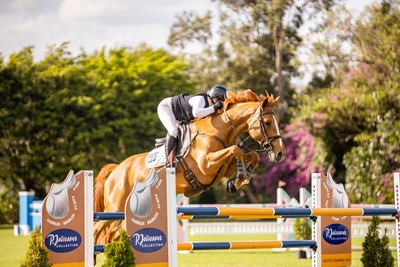 Aslee Bond on SemillyAshlee Bond and Darragh Kenny have been winners at the Turf Tour while Aaron Vale and Tracey Fenney have posted wins at HITS.

Kenny has also won the past two $5,000 1.30M Rising Star Classics, and Bond is no stranger to victory on the Turf Tour herself, although this was her first win with Semilly.

The spectacular footing and beautiful bougainvillea blooms were highlights of Black Watch's spacious polo field, which was divided into two rings for the week's competition.

Bond and Semilly F put in a late in the day ride to overcome Kenny's two top standings with Cicomein VDL and GK Casper.

Semilly F raced around the course designed by Leopoldo Palacios to deliver a 33.008 jump-off time, nearly 2 seconds faster than Kenny's time set earlier in the day.

Kenny first jumped GK Casper in the rain in a time of 37.034 seconds, only to be quickly overtaken by his Wednesday Rising Star Classic champion, Cicomein VDL, finishing in 35.226.

"I love how you can go to a show at a different location weekly, and compete in different arenas," said Bond of her Turf Tour experience. "The beautiful and relaxed environment and multiple venue options is really important and beneficial to both horses and riders. It's great for the horse's minds, to ride with less pressure and in various locations. A training environment is not something you see often in a show, like you do in Europe, and its great to have such a series here in Wellington."

HITS OCALA celebrated Mid-Circuit with the $200,000 Grand Prix on Sunday, Feb. 21, welcoming a field of 35 riders to the Stadium. 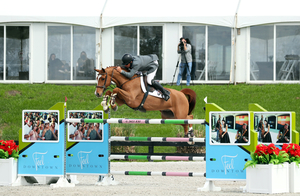 Aaron Vale on ElusiveAfter an unlucky rail in last Sunday's Grand Prix jump-off, Vale moved up in the standings to secure the win on Elusive.

"He's won several Grand Prix already this year and jumped one fence of the jump-off just 'this much too low' not to win last week," said Vale, pinching his fingers to show the 2 millimeters that stood between him and the blue last week.

Elusive, now 12, has been part of the Vale's Thinkslikeahorse family since he was a 6-year-old.

"We bought him as a 6-year-old and the plan was originally for him to be Mallory's (Vale's wife) horse," said Vale. "I competed him as a 6- and 7-year-old and he finished second in the 6-year-old Finals and won the 7-year-old Finals. Mallory started jumping him when he was 8 in the Amateurs and showed him successfully for a couple of years until I started showing him in the Grand Prix last year."

"The real story is that I didn't really have a big string of Grand Prix horses last year, like I do this year, and coming up to HITS the money was tremendous," said Vale. "Mallory said 'You know, you should try Elusive in the Grand Prix',"

"After he won two of the Sunday Grand Prix last year, which was quite valuable, Mallory hasn’t gotten him back,” said Vale.

“He's a great horse for our family and he's got a place in our dining room forever,” Vale said, referencing the paintings of their favorite horses that adorn the walls of their home.

"The Stadium arena is fabulous here - it's a nice big arena - and the footing is good," Vale said. "It's a rectangle which to me, makes course designers do a better job normally than a square. I appreciate the rectangle because subconsciously it encourages course designers to make good courses and they probably don't even realize that, but it's something my brain sees as a rider who has been to a lot of horse shows."

"The entries that are at HITS Ocala showing are pretty accomplished, so even though there were quite a few in the jump-off, it was all good horses and riders," Vale said of the 13 horse jump-off.  "He wasn't so fast last year, but I've had people tell me that he's the fastest horse in Ocala right now. I think that if he leaves the jumps up then he is hard to beat. He can jump a big enough jump to be in these big classes."

Fenney has won two classes, including first in the $10,000 HITS Open Prix on MTM Locadeur.

Fenney was the first to go in the class, posting a time of 36.761, which could not be caught.