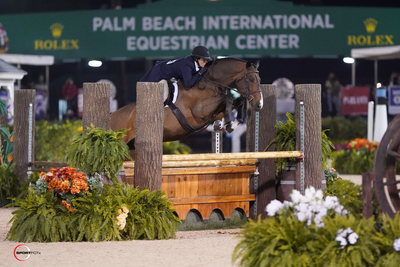 Amanda Steege on Lafitte De Muze (Photo by Sportfot)Thirty-three junior, amateur, and professional hunter riders competed over the track designed by Andy Christiansen, which consisted of 12 fences and was offered at 3’6”, 3’9”, and the 4’ height.

The top 12, 10 professionals and two juniors, returned for a second classic round before six judges split into three panels, Mary Lisa Leffler and Chris Wynne, Rachel Kennedy and Sissy Wickes and Tom Brennan and Mark Jungherr.

Tenth to come back in the order, Steege and the 10-year-old Belgian Warmblood by Darco showed off their handiness and rideability to receive a score of 88.83, which put the pair at the top of the leaderboard with an overall score of 177.74.

“My plan for round one was to just go as smoothly as I could and show off some galloping," said Steege. I" can trust that he’s going to jump the jumps with amazing style so I was just trying to do my job the best way that I could. For the second round, I did a different plan than the one we had decided when we walked it. Liza Boyd and I walked together with a few others, and we were not planning on doing some of the inside slices that we did. As we were watching people go and people started doing tighter turns and judges seemed to reward that, I actually phoned a friend. I called Tom Wright who was sitting in the stands literally as I was at the gate, and he helped me formulate a plan that he thought would be the best for Lafitte. I was happy that I was able to make it work.”

ELIZABETH TOWELL-BOYD on Walk-Off finished the first round in10th and then received the highest second round score of 91 to finish in second overall on a total score of 177.66.

Unlike many of the horses in the class, this was Boyd’s first time competing Walk-Off under the lights.

“My horse is honored to be second to a horse like Laffite,” said Boyd. “Being green, the first round I was a little cautious, and then the second round arrived and I was in 10th place, and I thought, ‘We’ll just go for it,’ and he really stepped up to the plate. He really proved to me that he’s a derby horse in the making.”

Third went to Geoffrey Hesslink, of Shelbourne, Vt., on Bond with a score of 89.33 which put them right behind Steege and Boyd.

“Bond is lovely. He does the junior hunters with his rider Isha Swani,” said Hesslink. “He’s done this class twice with her, so I knew he would be more than ready to do it. He’s always game for anything so I just tried to put in a nice smooth round.”

“I thought the course was great,” said Hesslink. “I like having more single jumps and there were a lot of those today, I thought it was nice that they also incorporated some trickier jumps that we haven’t seen here in the past.”

“It’s a huge honor for him to have this class on his resume,” said Steege, who placed second with Lafitte de Muze in the Hunter Spectacular in 2019. “It’s a class that’s very important to me every year and very important to his owner. Every year when we sit down and make his schedule, we plan his Florida season around this event to get to and to try to win. There are months of work that go into preparing for this class. This is a hard and stressful week; at first, you’re just happy to be qualified and then for me, once I’m qualified I can take a breath and really go in there and show off. It’s an experience that I’ll never forget.”