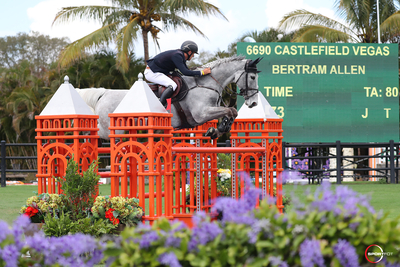 Bertram Allen on Castlefield Vegas (Photo by Sportfot)A field of 86 competed in hopes of qualifying for Sunday’s $137,000 Grand Prix CSI3* over the course set by Catsy Cruz  of Mexico, with 24  qualifing for the jump-off, 16 of which elected to return.

Last to go in the order, Allen posted the fastest time of the day, clean in 36.09 seconds.

“He’s a very new horse to me,” said Allen. “He arrived three weeks ago. I jumped him last week and he was very good, so it wasn’t the plan to jump him this week but because he was so good, we decided to jump again. We thought he’d like the grass, and he just seems to be getting better and better every round at the moment. He’s very competitive, and he’s a nice nature. He’s very careful and always trying his best.”

With heavy rain during the late stages of the first round, there was a momentary delay in the action.

ONCE THE first round finished up, the jump crew movied and resetf ences for the second round for the best possible footing.

Riders had the chance to walk the adjusted track before the jump-off got underway.

“The field is great,” said Allen. “There were a lot of starters today and with the rain, the grass held up super. No one was slipping or sliding, even in the jump-off after the rain.”

It was less than a second separating the winner from the runner-up as Beezie Madden on Breitling LS finished second , clean in 37 seconds flat.

Paul O’Shea0f Ireland on Chancelloress was third-place, clean in 37.72 seconds.

Allen had already had success earlier in the winter circuit, winning the $37,000 WEF Challenge Cup Round 2 on Pacino Amiro as well as a sixth place finish in the CSI5* grand prix during WEF 5.

“Pacino Amiro is only 9, so it’s great to be able to build him up here as well,” said Allen. “Pacino Amiro and Castlefield Vegas are both competing at a very high level and doing it well, so hopefully we’ll have a good season if things keep going this well.”

With 15 qualifying for the jump-off,  it was the best for last on the day as Bond was double clear and posted the fastest time of 26.24 seconds.

“We got her when she was 5,” said Bond. “It was a partnership horse for a while, but we bought them out at the beginning of last year because we really felt like she was something special and really suited me. I know her really well, and she’s just one of those horses that is so naturally careful. She doesn’t really know what she can or can’t do.

"I love jumping on this field,” Bond said. “The footing feels wonderful, the horses were really bouncing off of it, and the course was really smooth and flowed very nicely. I thought Catsy’s course was beautifully done.”

Bond credits the extra time at home due to the pandemic for helping her further the development of her talented mare, noting her flatwork and rideability have significantly improved.

The extra down time also allowed the horse to mature, continuing to learn the ropes, and Bond thinks she now has a better mind in the ring.

“I didn’t know if I was going to do the 1.50m this week because she’s only 8, but she’s so unfazed by the height,” Bond said. “I felt like the jumps could be three holes bigger, and she still would jump it like it’s no big deal. I jump big in the warmup ring because when I jump small, she feels ‘blah.’ If I put the jumps up and get her head up, she’s a little better because she thinks, ‘Oh, I have to pay attention and try.’ She had a few shows under her belt but to develop her and then win a 1.45m CSI3* her first time out is just so rewarding. I have such a young string of horses that every one of these is just so fulfilling. It feels so good. I’m just so excited.”

Canada’s Erynn Ballard was second last to go, finishing in 27.38 seconds to place second with Alex Matz of Coatesville, Pa. on Davidson clean in 28.45 second for third.