WELLINGTON, Fla.--Scott Stewart of Flemington, N.J., won three championships, in High Performance Hunters on Catch Me, in Green Conformation on Charlemagne and in Green Hunter 3'9"on Love Note,  while Jimmy Torano of Mohrsville, Pa. was champion in Green Hunter 3'6" Section A on Lascano on Feb 18 at WEF. 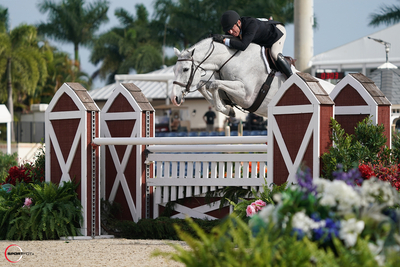 “We were not sure if he would ever get back to jumping again, especially at the four-foot height, but he feels better than ever,” said Stewart of Catch Me,who suffered an injury that kept him out of the show ring in 2020 until August. “We are just so happy to have him back showing again, and he has really been performing at his best.”

Scott Stewart earned his second championship of the day on Love Note in Green Hunter 3'9" with a first, two seconds, and a third place finish.

The he rode Charlemagne to his third tricolor ribbon of the day in the Green Conformation Hunter division.

Stewart  won two firsts, a second, and a seventh place ribbon to beat reserve champion Torano on Laskano after they earned a first, two thirds, and a seventh.

Stewart on Theory was also reserve champion in Green Hunter 3'6" Section B with second and eighth places.

TORANO on Laskano won three firsts and a fifth place ribbon in Green Hunters for the championship. 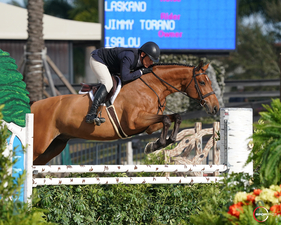 Jimmy Torano on Laskano (Photo by Sportfot)“This is obviously an important week that we all gear up for,” said Torano. “My horse was wonderful. He won every over-fences class and won in the Green Conformation division as well. This horse wants to win every time out and doesn’t want to let you down. I was glad his owner, Daryl Portela, was able to watch him and everything really fell into place nicely.”

Evan Coluccio, of Marshall, VA, claimed both champion and reserve in the High Performance Conformation Hunters.

Coluccio rode Philadelphia Story, to win two firsts, a second, and a third , while Pritchard Hill was reserve champion with a first, second, two thirds, and a sixth.

“I have actually never qualified for the night class, so my goal for this week was to just get one qualified,” said Coluccio. “As I was hacking I was thinking, ‘Wow, I could be champion and reserve.How did this happen?’ I’m really thankful for these horses and the owners, the Lignelli family and Balmoral, as well as my whole team who works endlessly to make this happen.”

Samantha Schaefer of Westminster, Md., was champion in Section B of the Performance Hunter 3’3” on Emilio with first, second, and third places.

“We just purchased Emilio in November of last year to eventually be a junior hunter mount for his owner Ava, who currently competes him in the Children’s Hunters,” said Schaefer. “He has a great presence and expression across the ground, and that is what really stuck out to me about him that I think gives him an edge.”

“His main goal is obviously to win with Ava in the Children’s Hunters this weekend, but with that in mind, we wanted to give him a professional ride," she said. "To come out as the winner in a very competitive group of horses was definitely a plus.”